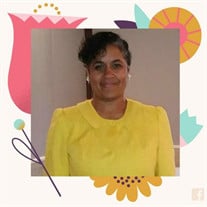 Nancy “Criket” Perez, went to be with the Lord on November 25, 2020. She was fifty-one years old. Her final resting place was her long-time home of Egg Harbor City, NJ, where she was a resident for fourteen years. She was born on May 18, 1969 in Brooklyn, NY, where she remained until 1996. In 1996, she moved to West Palm Beach, FL. She remained in Florida for eleven years before moving to her final home in Egg Harbor City, NJ. Her dream was to work with children as an educator. She accomplished this dream and became a daycare teacher. She ultimately received her associate degree in children’s development. She began her career in West Palm Beach, FL, and later completed her career in Egg Harbor Township, NJ, at the Police Athletic League Little PAL’S Preschool. Throughout her lifetime her fondest pastime was singing. In her earlier years she captured audiences with her renditions of songs by the late artist, Selena Quintanilla-Perez. She even once performed “Bidi Bidi Bom Bom” as a finalist on “Sabado Gigante”. However, church was where she realized her voice had a greater meaning. She worshipped the lord in the ministry of music for many years. On any given Sunday you could find her praising the Lord through song whether it be a solo or within the church choir. She was an active community member. She was lovingly known in her community as Miss Nancy. She was recognized as a figure in the community for never denying those in need. Nancy was the daughter of Juan Perez and Doris Laureano. She was the devoted mother of Jonathan, Stephanie, Felicita, Nancy, Macho, and Kianarose. She was the loving grandmother of Izayah, Adam, Audrick, Dominic, Leilani, Eva, Boston, and Johnnie. She was the sister of Manny, Kevin, Anthony, Robert, and Lucy. She is also survived in death by her second mother, Nilsa. We would also like to honorably mention her dog, Maya. The viewing will be held on Thursday, December 3rd at Wimberg Funeral Home located at 400 Liverpool Avenue in Egg Harbor City, NJ 08215. It will be open to the public from 1PM-2PM. We will allow small groups to enter the viewing at a time. We are requiring everyone in attendance to wear a mask and sanitize before entering the viewing. Thank you to everyone that has helped us through these difficult times. Your prayers, kind words, and donations have been greatly appreciated.

Nancy &#8220;Criket&#8221; Perez, went to be with the Lord on November 25, 2020. She was fifty-one years old. Her final resting place was her long-time home of Egg Harbor City, NJ, where she was a resident for fourteen years. She was born... View Obituary & Service Information

The family of Nancy "Criket" Perez created this Life Tributes page to make it easy to share your memories.

Send flowers to the Perez family.