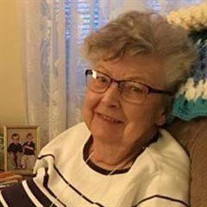 Muriel A Leggio, passed away on Friday April 6, 2018 at the Health Center of Galloway. She was born in Paterson, NJ on May 27, 1927, the daughter of Arthur and Margaret Albinson. Muriel A Leggio was a member of ‘The Greatest Generation’. Muriel was born in Paterson, NJ but moved to Washington, NJ, where she met and married Frank J. Leggio. After Frank returned home after World War II, they started their family and spent most of their lives there in Washington, where they both worked very hard to achieve their goals. Frank worked in a variety of jobs prior to buying ‘Washington Auto Top’ which he grew into a very successful business and after owning it for over thirty years, he sold it and retired. Muriel worked in several jobs outside of the home before finally becoming a career employee of New Jersey Bell, where she was an operator and eventually promoted to Assistant Chief Operator of the Washington Office. Muriel retired from Jersey Bell after more than thirty years of service. Once they had both retired, they sold their home in Washington and relocated to South Jersey where they bought a home in Smithville and they resided there until Frank’s death on May 17, 2016. Subsequent to her husband’s death, Muriel sold her Smithville home and became a resident of Villa Raffaella in Pleasantville, NJ, where she enjoyed her apartment and the excellent care provided to her there. Muriel and Frank were totally dedicated to their family and worked tirelessly to try to ensure that they were able to provide well for them as well as to enjoy them to the fullest extent possible. Muriel and Frank were married on January 11, 1945 and celebrated seventy-one years of marriage prior to Frank’s death on May 17, 2016. Muriel is survived by her son, Frank J. Leggio Jr, LTC, USA (Retired) and her daughter in law, Yvonne B Leggio of Holmes Beach, FL; her daughter, Michelle A. Leggio of Galloway, NJ; her three grandsons, Frank J. Leggio III, Michael Leggio and Gabriel Morales; five great grandchildren, Chloe Scarpino, Cade Leggio, Blake Leggio, Joseph Leggio and John Leggio; her two brothers, Robert Albinson and his wife, Judi, John Albinson and his wife, Patricia; as well as her sister in law, Tess Albinson. Muriel was preceded in death by her brother, Arthur Albinson and sister, Marjorie MacGregor and her husband, Richard MacGregor. There will be a celebration of life at a future date.

Muriel A Leggio, passed away on Friday April 6, 2018 at the Health Center of Galloway. She was born in Paterson, NJ on May 27, 1927, the daughter of Arthur and Margaret Albinson. Muriel A Leggio was a member of &#8216;The Greatest Generation&#8217;.... View Obituary & Service Information

The family of Muriel A Leggio created this Life Tributes page to make it easy to share your memories.

Send flowers to the Leggio family.