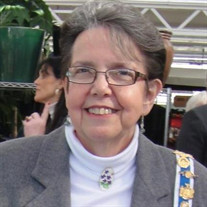 Mildred Mignon Matthews, 79, CLEMENTON, NJ ,former spouse of Albert L. Gunzenhauser, Sr., died August 27, 2018 at Atrium Post Acute Care of Woodbury, Woodbury NJ. Born in Jewett, New York on January 22, 1939, she was the daughter of Harry Allen Matthews and Mildred Lois Finn Matthews. Mignon graduated from Windham-Ashland-Jewett Central School with a Regents Scholarship and other academic awards, and attended SUNY Fredonia for a year. She later achieved her B.A. with Honors from Stockton State College and certification to teach music. She was an accomplished vocalist. She served in the Women’s Army Corp. in Alabama and in Illinois prior to her marriage. Her career included, in addition to her music, administration of an ESL School, Corporate Training and Management of Customer Service Departments. She attended St. Paul’s Presbyterian Church in Laurel Springs, NJ, where she sang in the choir. She was a member of the Colonial Dames of the 17th Century, the Daughters of the American Revolution and the Ladies of the Grand Army of the Republic. She served on the Board of the Trowbridge Homeowners Association for fourteen years, eleven as President, and was a Docent at the Indian King Tavern in Haddonfield, NJ. Mignon was a devoted mother and grandmother, who loved her family, cats, music, travel and genealogy. She was also the author of Mom No More. She is survived by three grandchildren, Alexandra Eva Gunzenhauser (Edward) McGurkin, Albert Eric Gunzenhauser and Billy (Kate) Cosenza; great granddaughter, Charlotte Cosenza; daughter-in-law, Robin McKaig; nieces, Diana (Howard) Schnettler, Lorraine Whitcomb, Debbie (Wilmer)Start, Cindy (George) Tortorellis, and Beverly (Peter) Humenetskyj; nephews, Gerald (Kathleen) Whitcomb, Earl Whitcomb, Billy Matthews, Todd Matthews, and Timmy (Bobbi Jo) Matthews; grand-nieces and nephews and several cousins. She was predeceased by her parents; her daughter, Eva Lois Gunzenhauser; her son, Albert Louis Gunzenhauser, Jr.; her brother, Harry William Matthews; her sister and brother-in-law, Nellie Elizabeth and Roger Whitcomb; and her nephews, Wilmer Start and Howard C. Schnettler, Jr. Arrangements are under the direction of Wimberg Funeral Home in Egg Harbor City, NJ. Per her instructions, her cremains will be interred between those of her two children, Eva and Albert, in Germania Cemetery, Pomona, NJ. A memorial service will be held on Saturday, September 15th at 1:00 PM at St. Paul's Presbyterian Church, 433 Park Place, Laurel Spring, NJ .

The family of Mildred Mignon Matthews created this Life Tributes page to make it easy to share your memories.

Send flowers to the Matthews family.