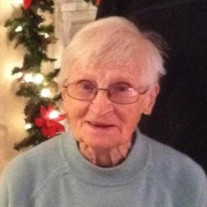 Mildred Lillian Lamond, 93, of Egg Harbor City, New Jersey passed away on December 22, 2020 at AtlantiCare Regional Medical Center in Atlantic City, New Jersey due to complications of the novel coronavirus COVID-19. Millie was born on May 11, 1927 in Jersey City, New Jersey to Mildred Hazel Platt and Wilbur Lamond. Although her parents divorced when Millie was young she had a happy childhood growing up in Jersey City with her mother and maternal grandparents Edward W. Platt and Laura B. Fry. Her mother later married Lloyd Cornelius. From age 6-8, Millie attended the Pickard and Leslie Studios of Stage & Radio Arts and sang and danced as a duo with Florence McDaniel billed as the Wonder Babies. The two performed in the Stars of Tomorrow and numerous times for the Jersey City Police Safety League. Reviews of their performances were often in the Jersey Journal including one describing them as “a nimble footed singing and dancing team”. Millie turned her attention to horses becoming an accomplished Equestrian and winning many Blue Ribbons and Trophies. At age 10, she won the prestigious “A. Henry Moore Trophy” and was presented the Cup by then U.S. Senator A. Henry Moore. She graduated from Roselle Park High School in 1945. Invited by her uncle, Millie signed on as a crew member of the American Export-Isbrandtsen Lines. By 1947 she sailed the world for 18 months working as a purchaser on the SS Flying Clipper, which was the decommissioned WWII Tolland-class attack cargo ship USS Southampton. She visited ports in Cairo, Kobe, Manilla, Hong Kong, Istanbul, Korea, Italy, Siam, Casablanca, Calcutta and Bombay. Millie managed the Captain’s Inn in Forked River New Jersey for several years and built a life-long friendship with Elsie Samer, who also worked there. In the early 1980’s Millie was hired by the Trump Organization becoming a Senior Buyer for all of Trump properties with an office in Atlantic City. Millie handled contracts involving meat and liquor for all of Trump properties in the Mid Atlantic. While at Trump, she frequently traveled to the Midwest to inspect livestock and review feed records, prior to purchasing. For years, Millie set shrimp prices in the Mid-Atlantic region. She retired from Trump in 2015. Millie is predeceased by her mother Mildred Hazel Platt, father Wilbur Lamond, step-father Lloyd Cornelius and longtime friends Dr. Elizabeth P. Takacz and Elsie G. Samer. Millie was small in stature but had a larger than life commanding presence. Her care and compassion towards others, including her beloved animals, will be sorely missed. She had many friends throughout her lifetime, in her career, in her close-knit community, and in her Church. Her sharp intellect, wit, lively discussions, passion for good food and charitable generosity was felt in all corners of her life. A visitation will be held on Tuesday, December 29th from 10:00 to 11:00 AM and a service at 11:00 AM at Wimberg Funeral Home, 400 Liverpool Avenue, Egg Harbor City 609-965-0357. Interment will follow at Germania Cemetery, Egg Harbor City, New Jersey. If you cannot attend, please join us online for the service on Tuesday, December 29th at 11:00 AM at the following link; https://webcast.funeralvue.com/events/viewer/43781 In honor of Millie’s love of animals and in lieu of flowers, donations may be made to the Humane Society of Atlantic County, 1401 Absecon Blvd, Atlantic City, NJ 08401 609-347-2487

Mildred Lillian Lamond, 93, of Egg Harbor City, New Jersey passed away on December 22, 2020 at AtlantiCare Regional Medical Center in Atlantic City, New Jersey due to complications of the novel coronavirus COVID-19. Millie was born on May 11,... View Obituary & Service Information

The family of Mildred Lillian Lamond created this Life Tributes page to make it easy to share your memories.

Send flowers to the Lamond family.