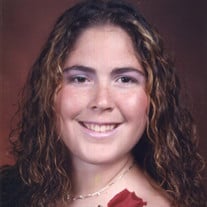 Michelle Louise Marano, 33, passed away quietly, Thursday, October 20, 2016 at her home in Cologne. Michelle graduated 8th grade from Arthur Rann M.S. where she earned the Mary Ellen Starn Leadership Award. She played softball & basketball for Galloway and Absegami and earned many trophies for her remarkable athletic ability. She graduated from Absegami H.S. in 2001with many honors including the National John Philip Sousa Award, the Principal’s Award for Music, and Outstanding Soloist and Section Leader Awards in the Absegami Marching Band. She went on to graduate from Montclair State University in 2006 with a B.A. in Music Education and belonged to SAI Music Sorority. Since graduation, Michelle performed as a professional musician in the South Jersey Area Wind Ensemble, the Atlantic Pops Community Band and at many charity and community events. She was a flute player in the music ministry of her church and played alongside her father; her teacher and inspiration. Michelle had been employed as a music teacher and band director in Barnegat, Egg Harbor Twp., and Atlantic City Schools. Michele touched and influenced countless lives along her swift journey. She had a never ending laugh, sense of humor, and optimistic attitude through thick and thin. She was naturally talented and accomplished as a flute & piano player and songwriter. She especially enjoyed playing duets with her father, brother, and mother. She never missed an opportunity to spread joy with her beautiful and heavenly music. She will be sadly missed by all who knew her. She will now play duets with the angels for all eternity. Michelle is survived by her parents, Michael and Maria Marano; her brother, Captain Michael D. Marano III and his wife, Meredith Marano; her grandmom “nanny”, Mary DeVincenzo; her Godfather and Uncle, Frank Marano and Aunt Dolores Stolfi; her Aunt Linda and Uncle Teddy Zuczek; her Aunt Judy and Uncle Rosario Maira; her Uncle, Michael DeVincenzo; and many loving cousins and friends. Visitation will be held on Thursday, October 27th from 6:00 to 8:00 PM at Wimberg Funeral Home, 400 Liverpool Ave., Egg Harbor City 609-965-0357. And again on Friday, October 28th from 10:00 to 11:00 AM at Our Lady of Perpetual Help – Church of the Assumption in Galloway with a Mass of Christian Burial at 11:00 AM. Interment will immediately follow at Laurel Memorial Park Cemetery on Tilton Road. For directions or condolences, please visit wimbergfuneralhome.com. In lieu of flowers, donations may be made to the family to help with the funeral expenses.

The family of Michelle L Marano created this Life Tributes page to make it easy to share your memories.

Send flowers to the Marano family.