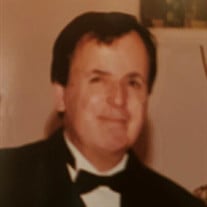 Michael Opuszynski, age 75, of Smithville, NJ (formerly of Pomona, NJ), passed away on November 21, 2020. Michael Opuszynski was born July 19, 1945, in West Philadelphia, PA, where he attended St. Thomas Moore High School. In 1961, Michael Opuszynski moved to Ventnor, NJ where he graduated from Atlantic City High School in 1963 and furthered his education at Atlantic Community College. In 1964, Michael met the love of his life, Rita Fick, at the Lit Brothers Department store. They were married in November 1967 and celebrated their love, marriage, and family for nearly 53 years. Michael’s career was with Atlantic Electric and he retired after 25 years. Post retirement, Michael worked for the Atlantic City Expressway and the Showboat Hotel and Casino. Michael was a beloved husband, father, grandfather, uncle, and friend. Michael loved the joys of reading and writing. Michael became a published freelance writer. Some of his works included pieces such as the “Diving Horse” in the Atlantic City Magazine, articles in the Atlantic City Press as well as other short stories. Michael lived a simple life whose priority in life was family. Michael was an active member of the community - volunteering as a CCD teacher at Assumption Roman Catholic Church as well as coaching for his son’s little league baseball teams. His passions in life were his wife, children, grandchildren, family, and friends. Michael was also an avid fan of the Philadelphia Phillies and Eagles. Michael also was a fan of the Mummers, and was a participant in the annual parades in the streets of Philadelphia. Michael is predeceased by his parents, Stanley and Ruth Opuszynski. Michael is survived by his beloved wife of 53 years, Rita (Chickie); daughter, Karen Taylor; son, James Opuszynski and his wife, Den-el; son, Joseph Opuszynski and his wife, Cheryl; sister, Helena (Posie) Kosoff and her husband, Richard; grandchildren, Joseph Taylor (JT), Jade Opuszynski, Tyler Opuszynski, Max Opuszynski, and Brody Opuszynski. Visitation will be held at Wimberg Funeral Home, 211 East Great Creek Road, Galloway, NJ at 9:30 a.m., Monday, November 30th followed by a Mass of Christian Burial at 12:00 pm at Our Lady of Perpetual Help Parish, 146 South Pitney Road, Galloway, NJ. Final prayers will be held at Holy Cross Cemetery, 5061 Harding Highway, Mays Landing, NJ, immediately following the mass. For condolences or directions, please visit wimbergfuneralhome.com. In lieu of flowers, the family is requesting donations to the American Parkinson Disease Association.

The family of Michael Opuszynski created this Life Tributes page to make it easy to share your memories.

Send flowers to the Opuszynski family.