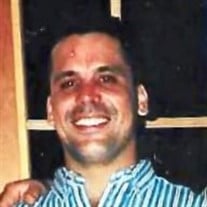 Michael Joseph Lucia Sr., of Atlantic City, passed away on May 14, 2021 at home. Mike grew up in Galloway, where he spent his days surrounded by his family and many friends, He was always busy, never missing an opportunity to throw a ball, play a game or ride his bike. He loved riding and continued to ride on the Atlantic City Boardwalk, where he loved to feel the wind as he went whizzing by. He attended school at the Church of Assumption Grammar School, Holy Spirit High School and Absegami High School. He excelled at sports and was active in baseball, football, wrestling, karate, and dirt bike riding over the years. However, his primary goal eventually turned to body building and you could always find him working out. Mike worked for years in the casino industry, both Las Vegas and Atlantic City, where many of his customers became longtime friends. Mike’s greatest pride and joy came from his children, Ashley & Michael Joseph Jr., as well as his granddaughter, the precious Marley. He was to become a new Grandpop again in December of this year, and felt his life was complete surrounded by the love of those special to him. Mike was predeceased by his maternal and paternal grandparents, Joseph R. and Edna Lucia, Vera Lucia, William E. and Betty M. Hayden along with his Uncle Mike Hayden. He is survived and greatly missed by his parents, Wayne R. and Mary Ellen Lucia; his brothers, Wayne Jr., Damon & Christian; his son, Michael Joseph Lucia Jr.; his daughter, Ashley Reider and her husband, Marc, along with their daughter and his shining little granddaughter, Marley Reider; his very special nieces and their spouses, Morgan and Matt Ehrke, Mikaila and Sean Mazza, along with their children, Clinton & soon-to-be-born, Savvy Ehrke, Sean, Olivia & Chase Mazza. He was also the proud uncle to Nick and Rachel Lucia and cousin to Emily. Services will be private and reserved for the family only. Arrangements have been entrusted to Wimberg Funeral Home in Galloway 609-641-0001. For condolences, please visit wimbergfuneralhome.com.

Michael Joseph Lucia Sr., of Atlantic City, passed away on May 14, 2021 at home. Mike grew up in Galloway, where he spent his days surrounded by his family and many friends, He was always busy, never missing an opportunity to throw a ball,... View Obituary & Service Information

The family of Michael Joseph Lucia Sr. created this Life Tributes page to make it easy to share your memories.

Michael Joseph Lucia Sr., of Atlantic City, passed away on May...

Send flowers to the Lucia family.