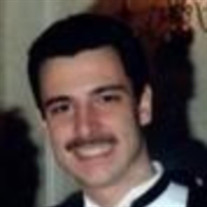 Michael Paul Johnston, 56, formerly of Runnemede, NJ, passed away on February 29, 2020 in Palm Springs, CA. Michael was born in Philadelphia, PA to James T and Melanie L Johnston on November 4, 1963. After graduating from Triton High School in Runnemede, NJ class of ’82, he went on to college at Shenandoah Conservatory in VA, where earned a Bachelor’s Degree in Music Performance and Musical Theater. During, his years in college Mike performed as a classical pianist in multiple events. Soon after college, he moved to New York City and performed in some off-Broadway plays and appeared in some nationally broadcasted Soap Operas. Music and Acting were the joys of his life. He moved to California when he was in his early 30’s and remained there until his death. Michael is preceded in death by his mother, Melanie L Johnston and his grandparents, Nicholas and Anna Petaccia. Michael is survived by his father, James T Johnston Sr. (Rita); his brothers, Edward Tootill (Bette Lou), Nicholas Tootill (Lois), and James Johnston Jr. (Tara); his sister, Joan Hanna (Craig); his nieces and nephews, Nicholas, Tara, Jordan, Kamryn, Jimmy, and Falyn; and his great nieces and nephews, Alexa, Jared, Eric, Mia, Nathan, and Audrey. Visitation will be held on Saturday, March 7th from 10:00 to 11:45 AM with a service at 11:45 AM at Wimberg Funeral Home, 211 E Great Creek Rd, Galloway, 609-641-0001. Interment will immediately follow at St. Joseph’s Cemetery, 240 Lower Landing Rd, Blackwood, NJ 08012. For condolences or directions, please visit wimbergfuneralhome.com.

The family of Michael Paul Johnston created this Life Tributes page to make it easy to share your memories.

Send flowers to the Johnston family.