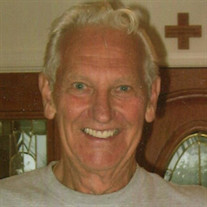 Manning, Mel was born in Topeka, KS of Scotch-Irish and Cherokee Heritage. He graduated from El Monte High School and joined the Navy in 1945. After boot camp, he was assigned to the USS New Jersey. Because he was an “Airdale” he was transferred to the Pomona Naval Base when the ship docked in Bayonne. There he became part Sq VX1 Love-VX3 as an air mechanic and also part of the crew of the USS Saipan. He and his buddies went to Egg Harbor for refreshments and the girls went to the same places to dance. Mel had a “Hotrod Ford” and when he stopped for the light on Rt. 30 and Philadelphia Avenue he would “rev” his engine and thus began the saga of Mel and Mae (Guerrieri) in 1948. According to Mae, he could swim, dance, skate, look good on the board, had a car – all the things a teenager wanted. By October 1949 they married at St. Nicholas Church. Mel worked at Nurre’s, then they moved to California where he found employment and they had their first child, Lynette (Lynne, died of cancer in PA many years later). Meanwhile, Mae missed her folks and came back east with Mel returning and they lived there until 1953 when Mel was hired by UAL. Mel and Mae Moved to Foster City, CA, where he was a maintenance engineer for UAL for 41 years, retiring in 1995 and then returning to Egg Harbor City. The couple had two more children, Michael Gregory – retired Green Beret and Business Owner and Anthony Mario – retired Navy and IT Project Manager. The family grew with 13 grandchildren, Doug, Michael, Krisann, Colleen, Cody, Helen, AnnMarie, Kate, Greg, Sarah, Cathryn, Rachel and Rebecca; 12 great grandchildren, Michael, Vincent, Gianna, Samuel, Andrew, Kasey, Nicholas, Dominic, Ryan, Taylor, Danny and Hawk; his many nieces, nephews, and cousins, Paula, Darlene, Lora, Lorna, Sharon and Art. He is predeceased by his parents, Blanche and Greg Manning and siblings, Dora, Everett, and Maxine. Mel would have celebrated his 89th birthday on August 19th and 67th wedding anniversary on October 29th but with his eyes on the Lord he chose to enter heaven to Praise, Glorify and Thank Jesus there. A visitation will be held on Saturday, August 27th at St. Nicholas Church in Egg Harbor City from 9:00 to 11:00 AM with a Mass of Christian Burial at 11:00 AM. Arrangements have been entrusted to Wimberg Funeral Home, 400 Liverpool Ave, Egg Harbor City, 609-965-0357. For condolences, please visit wimbergfuneralhome.com.

Manning, Mel was born in Topeka, KS of Scotch-Irish and Cherokee Heritage. He graduated from El Monte High School and joined the Navy in 1945. After boot camp, he was assigned to the USS New Jersey. Because he was an &#8220;Airdale&#8221;... View Obituary & Service Information

The family of Melvin Manning created this Life Tributes page to make it easy to share your memories.

Manning, Mel was born in Topeka, KS of Scotch-Irish and Cherokee...

Send flowers to the Manning family.