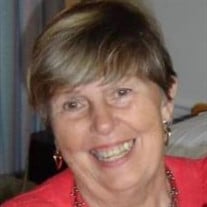 Maxine Swensen Kolbe, 84, passed away peacefully in the wee hours of January 5, 2021 at AtlantiCare in Atlantic City, NJ. Maxine is survived by her adoring husband of 66 years, Edward. Maxine and Ed raised a family of five children in Absecon, NJ, Stanley (fiancée, Trish Gonnelly) of Atlantic City, NJ, John (Vicky) of St. Augustine, Florida, Edward Jr. (Dawn) of Galloway Township, NJ, Deborah (Ken) Emmons of Mays Landing, NJ, and Beth Dalfonso (fiancé, Joe Watt) of Smithville, NJ. The Kolbe clan also includes twelve grandchildren and eighteen great-grandchildren ... Maxine was the eldest of three sisters and is survived by Phyllis Auge of Linwood, NJ and Andrea Ferry (Joseph) of Havertown, PA along with many nieces and nephews. Maxine was an animal lover and will be missed by her dachshund, Sammie. Maxine was also loved by Joann Schoenstein, Alice Fortis and Linda Reilly. Maxine was predeceased by her parents, Stanley and Frances Swensen, brother-in-law, Charles Auge and nephew Charles (Chuck) Auge. Maxine was born on August 15, 1936 in Atlantic City. She grew up in Pleasantville, NJ and graduated from Pleasantville High School in 1954 where she was a proud member of the marching band. She met her husband Ed when she was a teenager at the Ventnor Skating Rink. She married the love of her life on September 11, 1954 at the Epiphany Lutheran Church in Pleasantville. Maxine attended business school and after raising her family worked in local business offices. After retiring, Maxine and Ed moved to Brooksville, Florida where they resided for over 20 years. While there, Maxine, with Ed by her side, collected supplies to send thousands of packages to our military troops overseas. Maxine was truly a patriotic person and many of the recipients of those packages came to visit and thank her when they returned home. Four years ago, Maxine and Ed returned to their roots in New Jersey and settled in Mays Landing. You would often find Maxine working in her garden where she loved tending to her flowers and vegetables. Maxine also successfully tended to her beautiful orchids indoors. Once her children were raised, Maxine found many pets to nurture - cats, dogs, birds - she loved them all. Maxine was also thrilled when each grandchild or great grandchild was born because that gave her just one more baby to cuddle and love. Funeral arrangements are being made by the Wimberg Funeral Home, 211 East Great Creek Road, Galloway Twp. NJ. 08205. Visitation will be at 1PM Sunday January 10, 2021 followed by a service at 2PM. For condolences or directions, please visit wimbergfuneralhome.com. Because of Maxine’s love of all animals, in lieu of flowers, donations would be appreciated for FUNNY FARM RESCUE, 6908 Railroad Boulevard, Mays Landing, NJ 08330 or on line at www.funnyfarmrescue.org The family asks that you respect social distancing and wear a mask if you are joining them for the service. The service will be streamed live as well staring at 1:45 PM on Sunday, January 10th at the following link; https://webcast.funeralvue.com/events/viewer/44707

Maxine Swensen Kolbe, 84, passed away peacefully in the wee hours of January 5, 2021 at AtlantiCare in Atlantic City, NJ. Maxine is survived by her adoring husband of 66 years, Edward. Maxine and Ed raised a family of five children in Absecon,... View Obituary & Service Information

The family of Maxine Swensen Kolbe created this Life Tributes page to make it easy to share your memories.

Maxine Swensen Kolbe, 84, passed away peacefully in the wee hours...

Send flowers to the Kolbe family.