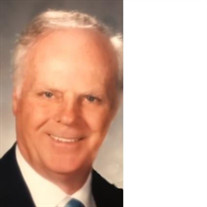 Ward Sr., Maurice, W., 89, of Galloway, NJ, was called home on September 26, 2020. The son of the late William and Ruth Ward and brother to the late Jean Ward, he was born on December 4, 1930 and raised in Newport News, VA. Maurice’s enlistment in the U.S. Navy brought him to South Jersey, where he met his wife, Helen (nee Schenkel) at a dance in AC. They settled in the Germania section of Galloway where he lived the rest of his life. Maurice was a jack of all trades. He worked in Engineering at NAFEC/FAA for 30 + years. In his spare time, he could be found doing TV repair house calls, tinkering on cars, riding the tractor, or driving the family wagon on cross country trips. Maurice was also an avid golfer for over 50 years, walking nine holes at age 80. It was no wonder his yard was always immaculate, trying to keep up with the greens. Maurice had many friends from winters in Florida, bus trip adventures, the Bacharach gang and his time as an AC Expressway toll collector. He had an unforgettable smile that shone even in the toughest of times; he persevered like no other. Maurice will be forever missed by his loving family, to whom he taught the value of respect, hard work and pride. He is survived by his wife of 66 years, Helen; and their four children, Maury (Cindy), Terri (Charlie) Matise, Karen (Todd) Haggeli and Roger. He is also survived by his six grandchildren, Stacey (TJ) Culleny, Amanda (Dominic) Ricciardi, Kristin (Scott) Roesch, TJ Hanggeli, Ryan and Kevin Ward; and his five great-grandchildren. Due to Covid the service and burial will be private. Arrangements have been entrusted to Wimberg Funeral Home in Galloway. For condolences please visit wimbergfuneralhome.com

The family of Maurice W. Ward created this Life Tributes page to make it easy to share your memories.

Send flowers to the Ward family.