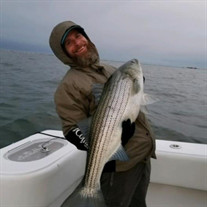 Matthew Todd Schoenstein, 44, of Mullica Twp., passed away on January 3, 2022. Todd grew up loving sports and played football, soccer, and basketball in Mays Landing. He inherited his love for nature from his Pop-Pop. He loved his Nanny and could often be found sitting in her kitchen eating homemade cookies or strawberry jam with his sisters, Danielle and Jillian. His favorite food was the homemade blueberry buckle his Mom baked for him. Todd spent many hours with his childhood friends riding his four-wheeler exploring the wilds of Laureldale. He was an avid hunter and fisherman, who dabbled in farming to create food plots for deer and other wildlife. Todd was a serious fisherman, winning various fishing tournaments, and sharing his gifts and knowledge with those he invited aboard his Boston Whaler – The Beautiful Stone. He loved to bow hunt. Todd enjoyed capturing with pictures and video the changes to wildlife throughout the seasons. If you were lucky, he would share them with you, minus the exact location. Todd worked alongside his father, Bill Jr. learning the HVAC business at a young age. Later, he started his own HVAC business Air Flow Technology. He continued that family tradition, bringing his son, Matthew alongside him to learn the trade from the best. Todd lived in Mullica Township with the love of his life for 21 years, Crystal in the home they designed, and he built along with their five children, Kaylah, Emily, Molly, Matthew, and Samantha. Todd was also gifted three grandchildren, Kaylani, Miliani, and Victor. Todd was very particular about his beard and even won an award for having the Best Beard. He was a Yankees fanatic, a Vikings fan, and a Notre Dame fan. He loved all genres of music because they spoke to his soul. Todd is predeceased by his paternal grandparents, Patricia and William Schoenstein Sr.; his maternal grandparents, Dorothy and George Turner; his father-in-law, Marcelino Pineiro; his paternal aunt and uncle, Sabrina and George Boyd; his maternal uncles, Donald Turner and Lee Pattison; and beloved family pet, silver lab, Luna May. Todd is survived by his wife, Crystal; his mother-in-law, Carmen Pineiro; his parents, Dorothy Schoenstein and Bill (Kim Lafreniere) Schoenstein Jr.; his sisters, Danielle (Kevin Vance) and Jillian; his children, Kaylah (Javiel Toro), Emily, Molly, Matthew, and Samantha; his grandchildren, Kaylani, Miliani, and Victor; his nieces and nephew, Charlotte, Loriann, and Troy; his sisters and brothers-in-law, Karen (Rashod) Martin and Cindy (John) Festino; his aunts and uncles, Gail (Jeff) Waldeman, Leslie (Chris) Corbet, Dawn (Dave) Smith, Frank Schoenstein, George Turner Jr, Gary (Sheri) Turner, Susan Pattison, Lorraine (Dean) Mulranney, Patricia (Mike) Famularo and Chuck (Linda) Turner; many, cousins, extended family members, business associates, hunting and fishing buddies; and his close friend, Chad. A visitation will be held on Friday, January 7 from 6pm to 8pm and again on Saturday, January 8 on 8:30am to 10am with the service starting at 10am at Wimberg Funeral Home, 400 Liverpool Ave, Egg Harbor City 609-965-0357. Interment will immediately follow at Egg Harbor City Cemetery, Moss Mill Road, Egg Harbor City. For condolences or directions, please visit wimbergfuneralhome.com. In lieu of flowers please send donations to The Hansen Foundation, 4 E. Jimmie Leeds Road, Suite 3, Galloway, NJ 08205 or go to www.hansenfoundationnj.org Your donations will go towards scholarships for substance use disorder treatment and recovery housing for individuals in need.

Matthew Todd Schoenstein, 44, of Mullica Twp., passed away on January 3, 2022. Todd grew up loving sports and played football, soccer, and basketball in Mays Landing. He inherited his love for nature from his Pop-Pop. He loved his Nanny and... View Obituary & Service Information

The family of Matthew Todd Schoenstein created this Life Tributes page to make it easy to share your memories.

Matthew Todd Schoenstein, 44, of Mullica Twp., passed away on...

Send flowers to the Schoenstein family.