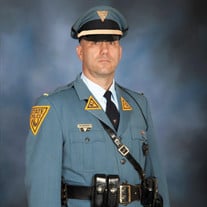 Matthew D. Razukas, 51, of Galloway Township passed away on Tuesday, July 27, 2021 at AtlantiCare Regional Medical Center. Matt was born in Brooklyn, New York and attended Bishop Ford High School. He received a Bachelor’s Degree in Administrative Science from the John Jay College of Criminal Justice. Matt graduated from the New Jersey State Police Academy in 2001 as a member of the 122nd State Police Class. He served as a Trooper in various stations in Troop A. Matt was best known and respected for his expertise as a Fatal Accident and Crash Reconstruction Investigator. He was a court recognized expert in Crash Reconstruction, who not only served the State Police, but many County and Municipal Law Enforcement agencies as well. He utilized his knowledge and skills to instruct in various venues throughout the State to include the New Jersey State Police Academy. Prior to enlistment with the New Jersey State Police, he served as a United States Park Police Officer for four years. Most recently, Matt served as the Administrative Officer at Troop D, Headquarters in Cranbury, holding the rank of Lieutenant. He excelled in every assignment, serving as a mentor to many young Troopers who would follow the path that he led. He was always ready to share his expertise and assist anyone in need, thereby, touching many lives. Matt loved to cook and eat, especially spicy food. Due to this love of spicy foods, he had been growing his own Ghost peppers and Carolina Reapers. His fellow Troopers at the station were jealous of his gourmet lunches. Matt was a proud and dedicated father of four who enjoyed being involved in his children’s sports and activities, recognizing their individual talents and interests. He was also a “Selfie King”, sending his wife random work pictures on a regular basis. Matt was a member of the New Jersey Association of Accident Reconstructionist, the New Jersey State Troopers Superior Officers Association and the New Jersey State Troopers Eagle Scout Association. Matt is predeceased by his father, Robert Razukas. He is survived by his loving wife, Lisette Razukas (nee Perez); their children, Megan, Ryan, Kyle, and Riley; his mother, Elizabeth Razukas (nee Baldachino); his brother, Christian Razukas; his aunt, Julia Baldachino; and his nieces and nephews, Nathan and Chloe Van Barnaveld, and Gia Razukas. A visitation will be held on Tuesday, August 3, 2021 from 1:00pm until 3:00pm at the Beacon Evangelical Free Church, 420 Sixth Avenue, Galloway, New Jersey. A Celebration of Life will begin at 3:00pm with New Jersey State Police Honors to follow. Arrangements have been entrusted to Wimberg Funeral Home of Galloway 609-641-0001. For condolences or directions, please visit wimbergfuneralhome.com.

The family of Matthew D Razukas created this Life Tributes page to make it easy to share your memories.

Matthew D. Razukas, 51, of Galloway Township passed away on Tuesday,...

Send flowers to the Razukas family.