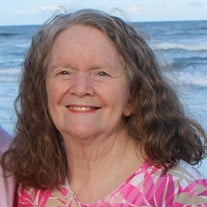 Surrounded by her husband and children, Mary Farrell Guerrieri, 77, entered heaven with prayers said and songs sung at her bedside on Sunday evening, February 20th, 2022. Mary, a resident of Egg Harbor City, NJ was born May 15, 1944, in Atlantic City to William and Kathryn (Thurston) Farrell. She grew up in Ventnor City, moving to Cologne during grammar school. Mary attended the original Holy Spirit High School in Atlantic City. Her extracurricular activities included: basketball, musical theater, and Drum and Bugle Corps. During her senior year, she garnered the lead role in, The King and I, starring opposite her future husband, Michael. Mary attended Rowan University (formerly Glassboro State College). She graduated with a degree in Education in 1966. She is survived by her devoted husband of 55 years, Michael H. Guerrieri; her brother, Michael (Carol) Farrell; her children, Gabrielle (John) Mancy, Michael J. (Sarah) Guerrieri, Gina (Jay) Deubel, Matthew (Sandy) Guerrieri and Maria (Steve) Puleo; her grandchildren, Gabrielle Faye (Daniel) Panchèvre, Andrew, Grace and Giavanna Mancy; Kayla, James, and Katie Deubel; Alexis, Gabe and Jake Guerrieri, and Isabelle and Reagan Puleo. She is predeceased by her parents, William J. Farrell and Kathryn Thurston Farrell. As a beloved Kindergarten teacher at St Nicholas School for 24 years, her classroom was always filled with smiles, laughter and music. Deservedly named, the Parochial School Teacher of the Year for the State of New Jersey in 2001. While singing with her mom in the back seat of the family’s car, she discovered her gift of harmony, that led to her lifelong love of music. Music led her to Summer Stock Theater, lead roles in college musicals, tour as Peter, Paul and Mary tribute band, and even created an album. While professing her faith through music, she directed St Nicholas Children’s Choir, teamed up with the Lutheran Church for Summer Music Camps and showcased famous kindergarten performances. She could always be found strumming her guitar during family vacation talent shows, featuring her grandchildren. Mary was a woman of great faith. She championed her husband Michael’s calling; a Deacon in the Catholic Church. She and Michael led a weekly prayer group every Monday night for 40 years. They ended each day together reading from a notebook full of prayers for different people in their life. They lived so purposefully for Christ that they evangelized by action, giving everything, they had to the less fortunate, and taught everyone they met about God’s love. From the minute her first grandchild was born ‘Mimi’ dedicated her life to loving and supporting her 12 grandchildren. She filled their book shelves with stories, their rooms with music and taught them how to pray. Relatives and friends are respectfully invited to attend the viewing hours on Sunday, February 27, at Wimberg Funeral Home in Egg Harbor City from 4PM to 7PM, Followed by a Rosary Vigil prayer service (7pm) Monday, February 28, 10 AM Funeral Mass at St. Nicholas Church, Egg Harbor. Burial to follow at Holy Cross Cemetery, 5061 Harding Hwy, Mays Landing, NJ. Mass will be live streamed for family and friends that can not make it. Please copy and paste the following link to view Mary's mass on Monday, February 28, 2022 starting at 10:00am: https://webcast.funeralvue.com/events/viewer/70108 In lieu of flowers, donations may be made to Our Lady of Perpetual Help Parish (St. Nicholas Church, Egg Harbor City), 146 S. Pitney Road Bldg. 1 Galloway, NJ 08205. (609) 652-0008

Surrounded by her husband and children, Mary Farrell Guerrieri, 77, entered heaven with prayers said and songs sung at her bedside on Sunday evening, February 20th, 2022. Mary, a resident of Egg Harbor City, NJ was born May 15, 1944, in Atlantic... View Obituary & Service Information

Please join us on Monday, February 28th live by 9:45 am by clicking the link; https://webcast.funeralvue.com/events/viewer/70108

Surrounded by her husband and children, Mary Farrell Guerrieri,...

Send flowers to the Guerrieri family.