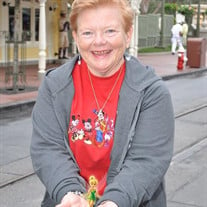 Bown (nee Meck), Mary Margaret, 73, of Galloway, passed away at home after a long illness surrounded by her family on Sunday, February 3, 2019. She was born on May 29, 1945 in Atlantic City, NJ to the late Charles and Angelina (Lipari) Meck. Mary Margaret grew up in Atlantic City, NJ where she married her husband, Ronald in 1965. Mary and Ron lived in Mays Landing until they completed building their beloved Port Republic home in 1973. This is where they spent the rest of their days raising Chuck, filling him with love, laughter, and a thirst for knowledge. She spent her last months with her Angels in Galloway. Mary Margaret graduated from Atlantic City High School in 1963. She worked at Fralinger’s Original Salt Walt Taffy during the summers as a teenager. Then after graduating high school, she worked for Atlantic City Electric as a secretary where she fell in love. Mary Margaret was a loving wife, mother, grandmother, and friend. She had a wonderful ability to make everyone laugh around her. If it was pink and glittery Mary had to own it; and own it she did! Throughout her life she enjoyed walking on the boardwalk with her husband, roller-skating, and especially her numerous trips to Walt Disney World. Mary’s face lit up when she spoke about Disney and shared all the memories from her time there; Tinkerbell was her favorite. Mary Margaret is predecease by her late husband, Ronald. She is survived by her son Ronald “Chuck” and his wife Karen of Galloway; grandchildren Jesse Quentin and Zoey Lynn of Galloway. A visitation will be held on Wednesday, February 6, 2019 from 5 to 7 PM, with a short service by the family at 6:30 PM at the Wimberg Funeral Home in Galloway. Arrangements have been entrusted to Wimberg Funeral Home of Galloway 211 E Great Creek Road, Galloway, NJ (609) 965-0357. Condolences can be extended to the family at wimbergfuneralhome.com. In lieu of flowers, family is requesting donations be made to the American Cancer Society.

Bown (nee Meck), Mary Margaret, 73, of Galloway, passed away at home after a long illness surrounded by her family on Sunday, February 3, 2019. She was born on May 29, 1945 in Atlantic City, NJ to the late Charles and Angelina (Lipari) Meck.... View Obituary & Service Information

The family of Mary Margaret Bown created this Life Tributes page to make it easy to share your memories.

Send flowers to the Bown family.