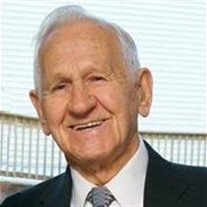 Marvin W. Goetsch, 93, of Egg Harbor Township, NJ passed away at home on Wednesday, December 26, 2018. Marvin was born in Sioux City Iowa on July 17, 1925. At age 17, Marvin left school and joined the US Navy during WWII. He served in the South Pacific Theater on the USS Wasp aircraft carrier as an Aviation Ordnance man, 2nd Class. While on furlough at the Pomona Air Base, now FAA, he met the love of his life, Blanche Spencer while roller skating at Young’s Ventnor Skating Rink. It was definitely love at first sight and they married with a very brief courtship. On Sept 22, 1944 prior to Marvin shipping out to sea they were married. 3 years later there were blessed with a daughter and lived in Pleasantville, NJ. They remained married just shy of 70 years and very much in love the entire time. Marvin was most known for his ice cream business he opened in 1967, Goetsch’s Dairy Bar on the corner of Jim Leeds and Pitney Roads in Galloway Township, NJ. Shortly after that he opened Goetsch’s Variety Store on the same property. They were very much a part of the community. The Goetsch’s were a very strong Christian family with values of God, Family and Country in that order. They walked the walk. They served faithfully at their church. They were known for serving coffee and donuts every Sunday for 3 services for over 13 years. They loved serving God’s people. Marvin will always be known for his good looks, wit, smile, and always being positive. He loved his wife and family and always saw the good in people. He will surely be missed. He is predeceased by his wife, the love of his life, Blanche (Spencer) Goetsch; his son-in-law, father of his grandchildren, Donald E. Morgan; his brothers, Roland Goetsch and Jerry Goetsch; and his sister, Beverly (Goetsch) Junck. Marvin is survived by his daughter, Barbara Morgan of Egg Harbor Township; his grandson, Donald M. Morgan and partner, Diedre James of Galloway Township, NJ; granddaughter, Rhonda L. Morgan of Egg Harbor Township; great-granddaughers, Taylor Lynn Morgan and Nikki Ann Morgan, both of Galloway, NJ and their mother, Sherri Morgan of Little Egg Harbor, NJ; his brother, Roger Goetsch from Iowa; and his sister, Joann (Goetsch) Johnson from Iowa. Please join us on Saturday, January 5th there will be a gathering from 9:30-11:00 am and memorial service at 11:00 am at Fresh Start Church, 1049 Ocean Heights Ave. Egg Harbor Twp. In lieu of Flowers, the family request donations be made to Atlantic Shore Cares in his honor. The money will be used on May 9 when KW Cares Nationwide gives back to their community and this year the event is scheduled to do something for local veterans and their families payable to: Atlantic Shore Cares and send to 802 Tilton Rd., Northfield, NJ 08225. Arrangements have been entrusted to Wimberg Funeral Home, 211 E. Great Creek Rd, Galloway, NJ 609-641-0001.

Marvin W. Goetsch, 93, of Egg Harbor Township, NJ passed away at home on Wednesday, December 26, 2018. Marvin was born in Sioux City Iowa on July 17, 1925. At age 17, Marvin left school and joined the US Navy during WWII. He served in the... View Obituary & Service Information

The family of Marvin W. Goetsch created this Life Tributes page to make it easy to share your memories.

Send flowers to the Goetsch family.