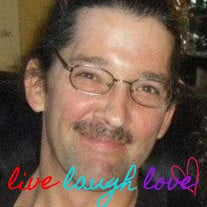 Martin Connors, born January 27, 1969 was called home on November 3, 2018 to be with his Lord and Savior, Jesus Christ in heaven. Martin was the youngest of 8 children of James Connors and Adelaide Marotta. Martin was a man of unyielding faith and a proud parishioner of a Christian church in Egg Harbor Township, New Jersey. Even when facing the last days of life, he continued to stay positive, smile, and pray for all those around him. Martin was a graduate of Egg Harbor Township High School and proudly worked many jobs such as The Yank Marine Boatyard (where he acquired the name, “Bungee”) and Busch’s Seafood Restaurant in Sea Isle City. It wasn’t until 2010 that Martin found his true passion and love of cooking in which he earned an Associates Degree of Culinary Arts from Atlantic Cape Community College. After a life-time of congenital heart issues, Martin received a heart transplant in January 2017 and after months of rehabilitation; he recovered with the hands-on assistance of his sister, Mary Connors. Unfortunately, Martin was diagnosed with AML Leukemia and lost his battle on November 3, 2018 in the comfort of his home with his sister Mary at his bedside until the very end. Everyone who came in contact with him was overcome by his contagious love of life, laughter, singing, and hope. Martin is predeceased by his mother, Adelaide Bickhardt and niece, Ci’Anni Smith-King. He is survived by 3 parents, James and Marcella Connors and David Bickhardt; his 7 siblings, Jimmy, Tommy, Mark (Irma), Mary, Joan (John Smith), Louise, and Daniel (Krisna); as well as 3 step siblings, Michael (deceased), Robert, and Senethia; a daughter, (Tiffany); and a host of nieces, nephews and close friends. In lieu of flowers, burial donations may by made at GoFundMe for Martin Connors. A visitation will be held on Thursday, November 8th from 12:00 to 1:00 PM with a service beginning at 1:00 PM at Wimberg Funeral Home, 211 E. Great Creek Road, Galloway 609-641-0001.

Martin Connors, born January 27, 1969 was called home on November 3, 2018 to be with his Lord and Savior, Jesus Christ in heaven. Martin was the youngest of 8 children of James Connors and Adelaide Marotta. Martin was a man of unyielding faith... View Obituary & Service Information

The family of Martin Connors created this Life Tributes page to make it easy to share your memories.

Send flowers to the Connors family.