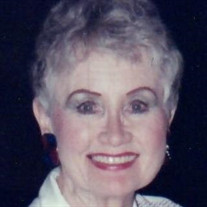 Eberle (Casey), Marie Anselm, 87, of Galloway, NJ, passed away on November 16, 2019, peacefully at home. Marie or Mary (which some people called her) was born on April 19, 1932 in Cork, Ireland. She was the only girl in a family of five children. She lived a unique and blessed life. She was raised by nuns from the age of 5 until 18 years old, when she came to America. She arrived in New York on New Year’s Day 1949 after traveling six days across the Atlantic from Ireland. In New York she held several jobs, most notably as a waitress at Schaffts restaurant, “The restaurant of the Stars”. Her lively personality impressed many of their patrons and it was there that she met the love of her life, Charlie Eberle. They married on April 4, 1959 and spent 58 wonderful years together. Through this union, they had a daughter, Patricia whom they loved wholeheartedly. Marie’s devotion and love to her family was the major focus of her life and was clearly evident in everything she did. Marie enjoyed singing and dancing and demonstrated her skills participating in several local shows. Marie also had a remarkable memory that she occasionally demonstrated by reciting numerous Irish poems, proverbs and songs that she learned while at the monastery she was raised in. Marie was dedicated to the church and attended mass every Sunday until her illness prevented her attendance. Marie is survived by her daughter, Patricia; adopted son-in-law, Michael; adopted stepdaughter, Holly; and numerous friends and relatives. Visitation will be Friday, November 22nd from 2 to 4 pm and 6 to 8 pm at Wimberg Funeral home 211 E. Great Creek Rd, Galloway NJ (609) 641-0001. Final visitation will be held Saturday, November 23rd from 9 to 9:30 am with a Mass of Christian Burial at 9:30 am at Our Lady of Perpetual Help Parish, 148 S. Pitney Rd, Galloway, NJ. Interment will immediately follow at the Atlantic County Veterans Cemetery on Rt 50, Estell Manor, NJ. For condolences, please visit wimbergfuneralhome.com.

Eberle (Casey), Marie Anselm, 87, of Galloway, NJ, passed away on November 16, 2019, peacefully at home. Marie or Mary (which some people called her) was born on April 19, 1932 in Cork, Ireland. She was the only girl in a family of five children.... View Obituary & Service Information

The family of Marie Anselm Eberle (Casey) created this Life Tributes page to make it easy to share your memories.