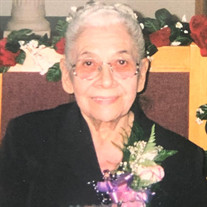 Batista, Maria G., - 92, of Egg Harbor City parted to be with the Lord peacefully on Wednesday, February 6, 2019. Born on May 15, 1926 and raised in Miraflores, Arecibo Puerto Rico, Maria came to the United States and resided in Atlantic City, NJ, where she worked as a military clothing inspector in 1970. She then moved to Egg Harbor City, NJ, where she resided for many years. Maria attended the Bible Institute in Vineland, NJ and graduated at the Latin American Bible Institute of New York Inc. in 1973. As she progressed in the ministry, she became a licensed minister affiliated with the Spanish Eastern District of the Assemblies of God. On her free time, she would go to the Vineland Adult Center, where she would voluntarily minister Christian services. Maria was also one of the first active members that remained at the Spanish Pentecostal Assembly of God Church in Hammonton, NJ, pastored by Rev. Alberto Torres Sr. Maria enjoyed sewing and knitting and spending quality time with her daughter, grandchildren and great-grandchildren. She is predeceased by her parents, Josefa Perez and Eusebio Serrano; her husband of 23 years, Oscar Batista; her son, Edwin Batista; and her siblings, Carmen, Francisca, Pepita, Miguel and Sergio. She is survived by her daughter, Elsa Bermudez and her husband, Jose Bermudez; her grandchildren, Zenaida, Joel and Marialys Bermudez, Edwin Jr. and Marcos Batista; and her great-grandchildren, Caleb, Zeriyah, Zayla, Xzavier, Angelyse, Samuel and Camila. Maria will always be lovingly remembered by her warm smile and her generosity and compassion towards others. She was surely loved by many. Visitation will be held on Wednesday, February 13th from 7:00 to 9:00 PM and Thursday, February 14th the service will start at 10:00 AM all at the Spanish Pentecostal Assemblies of God Church, 100 French St., Hammonton, NJ. Burial will immediately follow the service on Thursday at the Egg Harbor City Cemetery. Arrangements have been entrusted to Wimberg Funeral Home, 400 Liverpool Ave, Egg Harbor City, 609-965-0357. For condolences, please visit wimbergfuneralhome.com.

Batista, Maria G., - 92, of Egg Harbor City parted to be with the Lord peacefully on Wednesday, February 6, 2019. Born on May 15, 1926 and raised in Miraflores, Arecibo Puerto Rico, Maria came to the United States and resided in Atlantic City,... View Obituary & Service Information

The family of Maria G Batista created this Life Tributes page to make it easy to share your memories.

Send flowers to the Batista family.