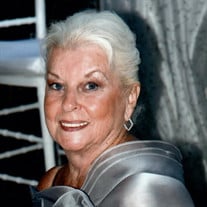 Margaret (Peggy) O’Neill, of Mays Landing, formerly of Colts Neck, N.J. passed away peacefully on Friday, May 4, 2018 surrounded by her loving family. She was born in Jersey City, N.J. in 1935, the only daughter of the late Jack and Ann Oley. Despite losing her father at an early age, Peggy excelled and graduated from Holy Family Academy in Bayonne where she was awarded a scholarship for her academics. She married her cherished husband, Robert (Bob) O’Neill in1954 and together they had six daughters. Peggy was a devout Catholic, and had an unwavering faith in God. She was a role model of style and grace for her daughters. She was truly beautiful inside and out. Although she worked for a few years in the fashion industry, she was a consummate mother and homemaker. Peggy shared her love and talent for creating a warm and welcoming home with her family and friends. She would often be found inventing a new recipe, engrossed in a good book, or watching sports, especially tennis, as she was an avid sports fan always cheering on her girls. Peggy had a strong moral compass and was selfless; she always thought of others before herself. She was the caregiver for her mother and husband in the later years of her life. Peggy is survived by her loving husband, Bob of 63 years, and her six daughters, Robyn Begley (Jim), Laura Grasso, Pam Hart (the late Ray), Debbie Castellano (Joe), Missy O'Neill (Joe), and Erica Marsh (Clint). "Gram" will be fondly remembered and greatly missed by her thirteen grandchildren, Chris, Marisa, Larisa, Jess, Nicole, Joe, Alex, Ray, Owen, Philip, Jack, Robert, Abby, and her three great grandchildren, Michael, Mathew, and Jordan. In keeping with her wishes, the family will gather together for a private funeral Mass celebrated by her beloved cousin and friend, Fr. Thomas McGrath, S.J. The family extends its sincere gratitude and appreciation for the overwhelming support, thoughts and prayers they have received. Donations may be made in memory of Peggy O’Neill to the AtlantiCare Foundation/Hospice. Arrangements have entrusted to Wimberg Funeral Home, 400 Liverpool Ave, Egg Harbor City 609-965-0357. For condolences, please visit wimbergfuneralhome.com.

Margaret (Peggy) O&#8217;Neill, of Mays Landing, formerly of Colts Neck, N.J. passed away peacefully on Friday, May 4, 2018 surrounded by her loving family. She was born in Jersey City, N.J. in 1935, the only daughter of the late Jack and Ann... View Obituary & Service Information

The family of Margaret (Peggy) O'Neill created this Life Tributes page to make it easy to share your memories.

Send flowers to the O'Neill family.