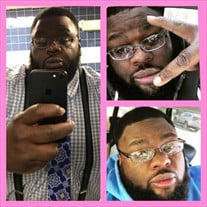 Marcus Phillip Johnson, 39, of Galloway, New Jersey entered into rest on January 14, 2022 at home. On February 18, 1982 Marcus was born to Eldridge Archie Johnson & Jessie Mae Johnson of Roselle, New Jersey. Marcus was the baby of 5 children from this union. He is deceased by his Father, Eldridge Archie Johnson (1933 to 2000); his Mother, Jessie Mae Johnson (1936 to 2015); his Oldest Sibling, Adrienne Mae Johnson (1960 to 2008); and his youngest sibling, Marcus Phillip Johnson. Marcus is survived by his Second Oldest sibling, Norris Johnson of NJ (1 child); his Third Oldest sibling, Johnny T Johnson of NC (wife, Cassandra & 3 children); his Forth Oldest sibling, Laliesa Johnson of NJ (7 children). Marcus was raised in the Roselle, New Jersey area and attended local public schools. As Marcus got older, in his later teen years, he met and fell in love with Raquel Bird. The two became one and out of this union, 3 beautiful children were born; Malachi Johnson (19), Christian Johnson (10), and Milani Johnson (9). Marcus and Raquel Johnson settled into the Mays Landing, New Jersey area and worked together to raise the children of this union. Marcus loved sports and was a huge fan of the Buffalo Bills...... Marcus and Norris often bantered back and forth about sports..... Marcus was last employed at Cozzini Bros of Sewell, NJ as a Business Development Manager. Marcus leaves behind to cherish his memory, Malachi, Christian, Milani and Raquel (divorced), his siblings Norris, Johnny & Lisa, his 5 nieces & 6 nephews, his many aunts, uncles, cousins and friends. Arrangements by Wimberg Funeral Home of Galloway 609-641-0001.

The family of Marcus Phllips Johnson created this Life Tributes page to make it easy to share your memories.

Send flowers to the Johnson family.