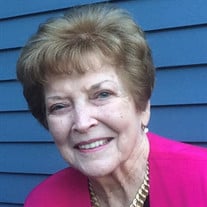 Marcia (Bard) Fox, 86, of Galloway, NJ has joined the Lord in the Kingdom of Heaven, having passed away peacefully March 7, 2020. Born March 15, 1933 to Oscar Cordery Bard and Ruth Stubbins, she grew up in Crisfield, Md, by the Tangier Sound of the Chesapeake Bay, where she developed a lifelong love of sailing. She lived much of her life in Absecon and Longport, and the last 21 years near Smithville. Marcia was employed in a variety of administrative jobs during her working life, the longest of which was at the Lashman and Kupperman Law Firm in Atlantic City, NJ, where she served as a legal secretary until her retirement in 1990. She also served as a Legislative Aide in the N.J. General Assembly from 1975-1981. She was previously married to John W. Fox (deceased 2017) of Bethlehem, Pa. Marcia is survived by her sisters, Beverly Quinn of Melbourne Beach, FL and Barbara Tyler and Becky West of Williamsburg, Va. She is also survived by her loving children, John William Fox Jr. (Diane) of Mays Landing, NJ, Patti Ann (Fox) Lang (Greg) of Absecon, N.J., and Gregory Alan Fox (Mary Ann) of Longwood, FL. She was also the beloved Grandmother of Michael John Fox (predeceased, 2012), Jennifer (Fox) Cressey (John), Stephen Horvath (Megan), Evan Horvath, Ryan Fox, Kevin Fox, and Colin Fox, as well as Great-Grandmother of Kane and Abigail Cressey. A visitation will be held on Thursday, March 12th from 10:00 to 11:00 AM with a service beginning at 11:00 AM at Wimberg Funeral Home, 211 E. Great Creek Rd, Galloway, 609-641-0001. Interment will immediately follow at the Absecon United Methodist Cemetery in Absecon. For condolences or directions, please visit wimbergfuneralhome.com. In lieu of flowers, please send donations to the Michael John Fox Scholarship Fund care of John and Diane Fox, 6160 White Oak Way Mays Landing, N.J. 08330.

Marcia (Bard) Fox, 86, of Galloway, NJ has joined the Lord in the Kingdom of Heaven, having passed away peacefully March 7, 2020. Born March 15, 1933 to Oscar Cordery Bard and Ruth Stubbins, she grew up in Crisfield, Md, by the Tangier Sound... View Obituary & Service Information

The family of Marcia (Bard) Fox created this Life Tributes page to make it easy to share your memories.

Send flowers to the Fox family.