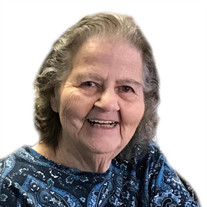 D’Agostino, Madeline, 87, of Galloway Township, loving Wife, Mother, Grandmother, and Great Grandmother, passed away peacefully at home on April 1, 2022. Madeline was retired from the local Business Cards Tomorrow plant which she helped run with her husband. She is survived by her two sons; James D'Agostino and his wife Janice (Toobert) of Mount Laurel, NJ and Brian D'Agostino and his wife Diane (Mitzel) of Galloway, NJ. Also, three grandchildren, Karen D'Agostino, her fiancé Douglas Foster and their sons Ryan and Evan, Nicole D'Agostino, Brianna D'Agostino; her brothers, George, Gabriel, and Ray Gross, and many nieces and nephews. She was preceded in death by her parents Anthony and Jennie Gross, brothers David, Louis, and Lawrence Gross, and sisters Rita Redden and Sandra Tilley. Funeral services are private. Arrangements entrusted to Wimberg Funeral Home, Egg Harbor City, NJ. 609-965-0357. Condolences may be left at wimbergfuneralhome.com. A Celebration of Her Life will be held at a future date.

The family of Madeline Theresa D'Agostino created this Life Tributes page to make it easy to share your memories.

Send flowers to the D'Agostino family.