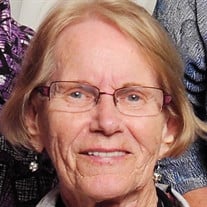 Grunow, Loris M. (nee Kienzle), age 87 years, of Pomona passed away on June 27, 2016 at Spring Village, Galloway. She was born in Germania, N.J. and was a Galloway Township resident for most of her life. She had the greatest love for husband Willard and family. Her passion for traveling the world, especially with loved ones, has been passed on to her family. Her other life’s interests included teaching, learning, reading, music, the outdoors, and nurturing those in need. She and her husband sold Christmas trees for more than 30 years under the label “Christmas Trees Grown with Love and Care”. Selling Christmas trees became a family tradition that was precious to her and is still continued by family members today. Loris graduated from Douglas College in 1950 where she majored in music. Her first year of teaching was in 1951 at Pomona School in Galloway Township. In 1952 she taught third grade for one year in the Atlantic City School System. Loris returned to the Galloway Township School System for thirty-four years. She taught at Pomona School grades 3, 4, and 8 and also at Arthur Rann Middle School 8th grade mathematics. She became the District Director of Mathematics and the Gifted and Talented Programs. She also served as Director of the South Jersey Consortium of Gifted and Talented Programs. She was a member of the Egg Harbor Moravian Church where she served as a Sunday school teacher, an Elder, a Trustee, and a Senior High Fellowship Leader. Other memberships included Phi Delta Kappa (an honorary education fraternity), Alpha Delta Kappa, (an honorary education sorority), American Association of University Women and the Cologne Grange. Loris was an active member of the Atlantic City Medical Center Auxiliary Board and served in several roles including President. Loris received the Distinguished Educator Award from Charles Kettering Foundation; the ACMC Mainland “Auxilian of the Year” (2000) and the Atlantic County Educator for Gifted and Talented award for dedicated service to Galloway and Atlantic County students. She is survived by husband, Willard of 63 years; son, Jeffrey of Harrisville, UT and wife Jill Daly; daughters, Lynn Grunow Folk of Thurmont, MD, Sharon Grunow of Pomona, NJ and husband, Robert Barker, Anne Grunow of Worthington, OH and husband, David Schmidt. Her grandchildren, who knew her as “Mimi,” are Timothy and Andrew Folk, Lisa Folk Sweeney, Brent Grunow, Brad Ferguson, Matthew and Isaac Schmidt along with great grandson, Joseph Sweeney. Loris was predeceased by her father, Lawrence Kienzle; mother, Marie Hanselman Kienzle; brother, Raymond Kienzle; and cousin, Herman Gaupp. A Celebration of Life Service will be held on Friday, July 1st at Wimberg Funeral Home, 211 E Great Creek Rd, Galloway, 609-641-0001, visitation from 5:00 to 7:00 PM with the service beginning at 7:00 PM. For directions or condolences, please visit wimbergfuneralhome.com. In lieu of flowers donations may be made to the Kienzle Music Fund in care of the Egg Harbor City Moravian Church, 235 Boston Avenue, Egg Harbor City, New Jersey 08215.

Grunow, Loris M. (nee Kienzle), age 87 years, of Pomona passed away on June 27, 2016 at Spring Village, Galloway. She was born in Germania, N.J. and was a Galloway Township resident for most of her life. She had the greatest love for husband... View Obituary & Service Information

The family of Loris M Grunow created this Life Tributes page to make it easy to share your memories.