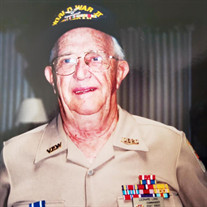 Long, Leonard (Lenny), long time Galloway Township resident, passed away peacefully on 6/23/20 at the age of 97. Leonard was the son of Wesley and Ethel (Davis) Long. He was born in Philadelphia and grew up in Havertown, PA. He graduated from Haverford High School. He then worked at Sun Ship after high school. He was drafted into the U.S. Army and spent three years in the South Pacific during World War II. He received two bronze stars and a purple heart for injuries in the Philippines and New Guinea. He was in the 166th AAA gun battalion. After the war, he went to work at RCA, the Philadelphia Naval Base, and then transferred to NAFEC, where he worked as an Electronics Technician in radar technology. He was married to Florence T. Long (Whitney) for 72 years until his death. They had six beautiful children. He was preceded in death by his sisters, Ethel Gealer, Dorothy Gallagher, and Evelyn Henzy; brothers, Wesley, Edward, and Robert Long; and baby daughter, Patricia Ann Long. Lenny is survived by his wife, Florence; son, Leonard Long (Debbie); son, Stephen Long (Edna); daughter, Kathleen Friedel (Andy); daughter, Jacqueline Long; son, Robert Long (Luz); grandchildren, Leonard (Denise), Wesley (Gladys), Meghan (Adam), Mitch (Erica), and Stephen; and great grandchildren, Cassidy, Brennan, Camila, and Vance. Visitation will be held on Monday, June 29th from 12:00 to 1:00 pm at Wimberg Funeral Home, 211 E. Great Creek Rd, Galloway 609-641-0001. A mass of Christian burial will start at 1:30 pm at Our Lady of Perpetual Help Parish, Church of the Assumption in Galloway. Burial will immediately follow at Holy Cross Cemetery in Mays Landing. For condolences or directions, please visit wimbergfuneralhome.com. In lieu of flowers, donations can be made to the VFW National Home for Children (VFWnationalhome.org), 3573 South Waverly Road, Eaton Rapids, MI, 48827, 1-800-424-8360.

Long, Leonard (Lenny), long time Galloway Township resident, passed away peacefully on 6/23/20 at the age of 97. Leonard was the son of Wesley and Ethel (Davis) Long. He was born in Philadelphia and grew up in Havertown, PA. He graduated from... View Obituary & Service Information

The family of Leonard "Lenny" Long created this Life Tributes page to make it easy to share your memories.

Send flowers to the Long family.