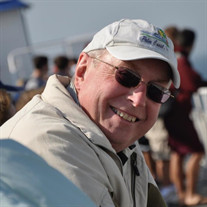 Lauren David (Dave) Rhine, 69, of Galloway, passed away on Tuesday, April 20, 2021 at AtlantiCare Regional Medical Center, Atlantic City, NJ. Beloved son, husband, father, and grandfather, Dave was born on May 15, 1951 in Philadelphia, PA. In his youth he traveled the world as a member of the Columbus (American) Boychoir School in Princeton, NJ and graduated from Carlisle High School in Carlisle, PA. Dave received his B.S. in Education from East Stroudsburg State College in 1973 and two masters degrees in Elementary Education and Educational Leadership from The William Paterson College of NJ. Dave’s career as an educator began as a fourth-grade teacher at Tisdale School in Ramsey, NJ. In 1981 Dave and his family moved to Aurora, NY, where he was Principal of Emily Howland Elementary School. He then returned to NJ in 1986 and became Superintendent of the Egg Harbor City School District, from which he retired in 2001. From 2003 to 2005 he returned to his role of Superintendent of Schools/Principal in Washington Township Schools in Burlington County. Dave enjoyed weekends with his brothers-in-law, college buddies, and Galloway friends playing golf, fishing, and watching sports. Dave is predeceased by his father, Lauren Dean Rhine. He is survived by his mother, Geraldine Wambaugh Rhine; his wife of 49 years, Rosemarie; his daughter, Shawn (Andy) Kalback, and grandchildren, Erin and Nora; his daughter, Kathryn; and his son, Patrick. He is also survived by his siblings, Stephen (Donna), Jonathan (Cathy), Timothy (June), and Rebecca (Rich) Hayward. He will also be missed by his mother-in-law, Marcella Wall, and his brothers and sisters-in-law in addition to many nieces, nephews, and their families. Visitation, a service, and reception will be held by the family on Thursday, April 29th beginning at 10:00 AM at the Centennial Pavilion of Seaview Hotel in Galloway Township. Arrangements have been entrusted to Wimberg Funeral Home, 609-965-0357. For condolences, directions and the livestreaming of the service, please visit wimbergfuneralhome.com. In lieu of flowers, the family asks donations to be sent to the Egg Harbor City Parent Teacher Organization: EHC PTO c/o Adrienne Shulby, Charles L. Spragg Elementary School, 601 Buffalo Street, Egg Harbor City, NJ 08215. Just join us for a livestream on Thursday, April 29th, starting at 10:15am using the following link: https://webcast.funeralvue.com/events/viewer/53037/hash:C442B3E34C0BE684

The family of Lauren David (Dave) Rhine created this Life Tributes page to make it easy to share your memories.

Lauren David (Dave) Rhine, 69, of Galloway, passed away on Tuesday,...

Send flowers to the Rhine family.