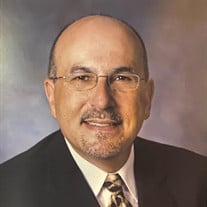 Dr. Larry J. Macaluso, 68, of Galloway Township, passed away August 19, 2021, at Fox Chase Jeanes Campus in Philadelphia, after a lengthy illness. A native of the New Columbus section of Nesquehoning, Pa., he was a son of the late Joseph and Anna Cellucci Macaluso. After earning his diploma from Panther Valley High School in 1970, Dr. Macaluso graduated from East Stroudsburg University with a Bachelor’s Degree in Education. He earned his Master’s Degree in administration at Lehigh University and his doctorate at Temple University. Upon his retirement as superintendent of the Red Lion Area School District in York County, Pa., the board of education named a newly constructed elementary school in his honor in 2009. Dr. Macaluso served the Red Lion district for 20 years – 17 as superintendent and three years as assistant superintendent. He retired on June 30, 2007. His successor, Superintendent, Dr. Frank R. Herron, thanked Dr. Macaluso's for his leadership. He also cited Dr. Macaluso for his commitment in making the education and well-being of students his top priority Dr. Macaluso began his educational career in the Allentown, Pa., City School District (1974-1987), first as an elementary school teacher at the Jackson school, then as principal of the Dodd, Cleveland and Washington schools. Following his retirement, he was an adjunct instructor at Temple University and a sales and human resources associate at Macy’s in Mays Landing. Survivors include his sons, Michael Macaluso of Windsor, Pa. and Matthew Macaluso, and his daughter, Kristina Ogurcak, both of Red Lion, Pa.; three grandchildren, Gwen Macaluso, Isaiah Ogurcak and Colton Ogurcak, and his longtime companion, Patrick McCormick of Galloway Township. He was pre-deceased by a brother, Joseph Macaluso, and a sister, Marie Rose Frassinelli. Visitation is private. Donations may be made to Be the Match - https://bethematch.org/, The Andy Talley Bone Marrow Foundation - https://www.talleybonemarrow.org/ Bone Marrow Research, Fox Chase Cancer Center - https://www.foxchase.org/giving/ways-give/donate-now Arrangements are entrusted to Wimberg Funeral Home of Galloway Township, NJ 09-641-0001. For condolences, please visit wimbergfuneralhome.com.

Dr. Larry J. Macaluso, 68, of Galloway Township, passed away August 19, 2021, at Fox Chase Jeanes Campus in Philadelphia, after a lengthy illness. A native of the New Columbus section of Nesquehoning, Pa., he was a son of the late Joseph and... View Obituary & Service Information

The family of Dr. Larry J Macaluso created this Life Tributes page to make it easy to share your memories.

Send flowers to the Macaluso family.