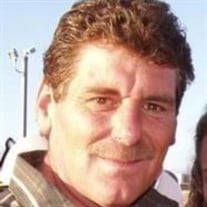 Kenneth G. Sooy Jr., 58, of Galloway, NJ passed on April 15, 2022 at home surrounded by his family. He graduated from Absegami High School Class of 1982 and attended Atlantic Cape Community College. While growing up, he played football, baseball and wrestled. Kenneth got a job with Comcast and worked for them for 32 years. One of his favorite past times was coaching his kids in wrestling, basketball and soccer. He even played on multiple adult softball leagues. Kenneth also loved playing Xbox, dogs and his Wawa coffee. Kenneth’s true love was music. He played bass for “Jersey Works”, “Whiskey Dawn”, “Frontiers” and many other bands over the years. He is deceased by his mother, Shirley Elaine Sooy. Kenneth is survived by his father, Kenneth G. Sooy Sr.; the mother of his children, Carol Sooy-Rudert; his children, Kenneth G. Sooy III and Noelle Sooy; his granddaughter, Lyra Aucott; his siblings, Denise Schwenger (Fred), Cheryl Ruggles (Larry Donnerstag) and Danny Sooy (Karen); his many nieces and nephews; his aunt, Sandy Soan; and his many friends, co-works, and bandmembers. A visitation will be held on Wednesday, April 20 from 5pm to 8pm with another one on Thursday, April 21, from 10am to 11am with a service at 11am all at Wimberg Funeral Home, 211 E. Great Creek Rd, Galloway 609-641-0001. Interment will immediately follow at Leeds Point Community Cemetery. For condolences or directions, please visit wimbergfuneralhome.com. In lieu of flowers, donations may be made to the Atlantic County Animal Shelter (www.atlantic-county.org/animal-shelter)

The family of Kenneth G. Sooy Jr. created this Life Tributes page to make it easy to share your memories.

Send flowers to the Sooy family.