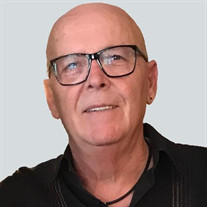 Julio left us to join our Father in Heaven on Friday, January 19th. Julio was born in La Linea, Spain and later moved to England working in the hospitality field and on cruise lines for 5 years. Eventually, Julio relocated to the United States where he worked in the casino industry as a Bellman. Several years later he was able to let his true talent shine working as a master carpenter. Julio retired about 10 years ago, but in recent years enjoyed working alongside his Godson, Taylor, doing home improvement projects. He is survived by his wife of 20 years, Janeth Delgado, his daughters, Monica, Sandra, Amanda (and her husband Dan), Erica (and her husband Luis), and his son Dillon. He is also survived by his brother Pepe and sister Sylvia; and predeceased by his brother Jesus. Julio spent that last three years of his life living in Mays Landing, NJ with his wife Janeth, best friends Santos & Lisa and good friend Scott. Julio loved spending time with his family, working on various woodworking projects, enjoying a nice glass of wine and Chata’s (his nickname for Janeth) cooking! He was a kind and loving man who would go out of his way to help anyone and will be remembered for his very strong heart and hands (anyone who shook his hand knows this). Julio had a great sense of humor and found something positive in the most difficult times. He was a stickler for perfection in his work and a pure old-fashioned gentleman in every sense. When he dressed, Julio he did so to perfection from his pleated shirt sleeves to great smelling cologne; if you hugged him you smelled like him {{insert family chuckle here}}. Julio was an avid fan of the soccer team Real Madrid. Anyone in the house or near vicinity knew when he was watching a game because whenever they scored, his enthusiastic shouts of “Gooooaaal!” could be heard blocks away. He was surrounded by his loving family and friends during his final days and passed peacefully to reunite with our Lord and Savior Jesus Christ. A Celebration of Life will be held on Saturday, January 27th, from 4pm - 8pm ET located at Sean and Amy Hoover’s home (Lisa’s son and daughter in law). Julio’s Celebration of Life Saturday, January 27th 4:00 pm - 8:00 pm Sean and Amy Hoover’s Home 564 S. Pitney Road Galloway NJ 08205 In Lieu of flowers, please visit: https://www.gofundme.com/juliodelgado

Julio left us to join our Father in Heaven on Friday, January 19th. Julio was born in La Linea, Spain and later moved to England working in the hospitality field and on cruise lines for 5 years. Eventually, Julio relocated to the United States... View Obituary & Service Information

The family of Julio A Delgado created this Life Tributes page to make it easy to share your memories.

Julio left us to join our Father in Heaven on Friday, January...

Send flowers to the Delgado family.