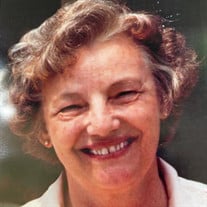 Julia Ann Hunt, 97, of Egg Harbor City, passed away on May 14, 2021. She was born November 13, 1923 in Philadelphia, Pennsylvania, the oldest child of Edward and Julia Will Langel. They moved to Egg Harbor City when Julia was about 10 years old. She often shared happy memories of growing up during the Depression with her sisters and brothers, Marie Schroeder, Anna Warker, Joe and John Langel, as well as her Will family cousins, aunts and uncles in Egg Harbor City. It was a close Catholic family. She attended St. Nicholas School and Egg Harbor City High School. The War years were spent working in the local garment factories making clothes for the soldiers and helping in the civilian efforts to support the war. A great photo shows her and her sister, Anna, standing on top of their grandfather, Robert Will’s, old brewery spotting for enemy planes On a trip to Florida with girlfriends, she met a handsome soldier in the Army Air Corp from Missouri. She and Edward Harrison Hunt married when he returned from the Pacific theater. They had a long and happy marriage until Edward passed away in 2007. Julia was a homemaker raising Tom and Pat, while actively working with the parent teacher organization for St. Nicholas School and the Rosary Society of St. Nicholas Church. She was an avid baker, gifting every charitable fundraiser, family gathering and individuals she knew with cookies, cakes and pies. Julia was always welcoming and friendly, hosting daily coffee klatches for neighborhood women and joining with them to take her children on outings to the nearby lakes and ocean. When her children were grown, she enjoyed working for twenty years as a saleslady at Ben Franklin 5 & 10, which was the social and gossip center of Egg Harbor City during the 1970’s and 1980’s. Julia is survived by her children, Thomas Edward Hunt and his wife, Patricia Coogan Hunt of Egg Harbor Township, and her daughter, Patricia Hunt Holmes of Houston, Texas. She is also survived by five grandchildren and their spouses, Kevin and Melissa Hunt of Drexel Hill, Pa., Kerri and Brad Marr, of Malvern Pa., Meghan and Rob Zimmermann, of Falls Church Virginia, Hillary and Matt Archer of Houston, Texas, and Ashley and Andrew Allison of Houston Texas. In addition she is survived by eleven great grandchildren, Jack and Luke Archer, Connor Alison, Kiera, Connor and Mara Hunt, Kaden, Logan, and Kalli Marr, and Cierra and Drew Zimmermann, She was a loving and supportive mother and grandmother and will be missed by all. Her children would like to thank in particular Veronica Baldiserra, Sue Barber, and David Warker for their loving care during the past few years. A visitation will be held on Monday, May 17, from 9:30 to 10:30 am at Wimberg Funeral Home, 400 Liverpool Ave, Egg Harbor City 609-965-0357. A Mass of Christian burial will follow at 11 am at OLPH Parish, St. Nicholas Church, 526 St. Louis Avenue, Egg Harbor City. Interment will be held at Egg Harbor City Cemetery. For condolences or directions, please visit wimbergfuneralhome.com. Please donate to the Community Food Bank of South Jersey or your favorite charity in lieu of flowers.

Julia Ann Hunt, 97, of Egg Harbor City, passed away on May 14, 2021. She was born November 13, 1923 in Philadelphia, Pennsylvania, the oldest child of Edward and Julia Will Langel. They moved to Egg Harbor City when Julia was about 10 years... View Obituary & Service Information

The family of Julia Ann Hunt created this Life Tributes page to make it easy to share your memories.

Send flowers to the Hunt family.