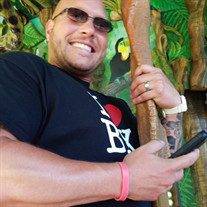 Josue Velez II, 42, of Egg Harbor City passed away on December 21, 2020 at AtlantiCare. He was born on July 3, 1978 in Bronx, New York. After high school, Josue moved to New Jersey. He had two kids; his son, Tiree on December 31, 1996 and his daughter, Addison on December 24, 2001. He worked hard over the years in nightlife and casinos to truck driver. In March 2009m Josue met his wife, Jessica (Velez) Sykes. For the next 11 years, Josue helped raise Jessica’s two kids, Jordon and Drake. He is preceded in death by his mother, Marilyn Dalmau; his grandmother, Idalia Dalmau; and his uncles, Hostion and Magdiel. Josue is survived by his wife, Jessica; his son, Tiree; his daughter, Addison; his stepdaughter, Jordon; his stepson, Drake; his father, Josue I; his sister, Darlene Santana and her husband, Eric; his brother, Jason and his wife, Sophie; his five nephews; his one great nephew; and his great niece on the way. Josue will be missed greatly be his family and all who knew him.

The family of Josue Velez II created this Life Tributes page to make it easy to share your memories.

Send flowers to the Velez family.