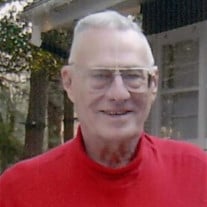 Joseph S. Wilson, 96, of Port Republic, passed away on January 4, 2018. He was born in Matawan, NJ, August 13, 1921, the only child of Joseph L. Wilson and Sarah Perrine Applegate Wilson. Graduated from Matawan High School, the class of 1940, from there he attended Roosevelt Aviation School and graduated in January 1941 as a Federal Certified Aircraft and Engine Mechanic. Joe went to Americus, GA with Graham Aviation where cadets were trained to fly. He enlisted in the Army Air Corp and discharged as an Aviation Cadet in 1945. Joe worked for Capital and Eastern Air Lines until 1948. He joined the Army Air National Guard as a Technician in 1948 and retired in 1976. While in the Air National Guard, Joe was recalled to Active Duty during the Korean War, Berlin Call-up and the Vietnam War. He retired as Chief Master Sergeant. Joe was a Quality Assurance Supervisor with the 177th T.F.G. Pomona, NJ and a Senior Engineering Technical Data Collector for Sikorsky Aircraft at Stratford, CT, before retiring in 1987. He was a member of the US Airforce Association, a life member of the NCO Association of the State of New Jersey, a life member of the NJ Devils Reunion Association of the 177th Fighter Wing of the NJ Air National Guard, and a member of the American Legion Post #158 of Egg Harbor City, NJ. Joseph’s wife to whom he was married for 70 years, Gloria M. Crapps Wilson will miss him deeply but will have many happy memories of their life together. Loving father of two daughters, Gloria Ann Wilson Turner (Robert Cleary) and Lisa Wilson Cahill (Jim); four grandchildren, Brittney DeVica (Johan), Becky Woods (Michael), Stephen J. Pinkos and Jeffrey R. Pinkos; and three great grandchildren, Stephen J. Pinkos Jr., Ella and Fischer Woods (twins). We will miss you Joe, Daddy and Pop Pop. A visitation will be held on Wednesday, January 10th from 10:00 to 12:00 PM with a service at 12:00 PM all taking place at Wimberg Funeral Home, 211 E. Great Creek Rd, Galloway 609-641-0001. For condolences or directions, please visit wimbergfuneralhome.com. Donations may be made in Joe’s name to the American Legion Post #158, Egg Harbor City, NJ.

Joseph S. Wilson, 96, of Port Republic, passed away on January 4, 2018. He was born in Matawan, NJ, August 13, 1921, the only child of Joseph L. Wilson and Sarah Perrine Applegate Wilson. Graduated from Matawan High School, the class of 1940,... View Obituary & Service Information

The family of Joseph S. Wilson created this Life Tributes page to make it easy to share your memories.

Joseph S. Wilson, 96, of Port Republic, passed away on January...

Send flowers to the Wilson family.