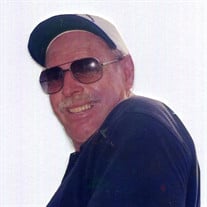 Joseph Alton Loveland, Jr., 73, of Port Republic, passed away on Wednesday, August 2, 2017 at Atlanticare Regional Medical Center, Mainland Division. Joe attended Port Republic Elementary school and graduated from Pleasantville High School in 1961. Joe was known as the "no hitter" pitcher and was even being observed by scouts from the Philadelphia Phillies. He played softball well into his thirty's for a few local teams including Gibson's Plumbing and Heating, Copsey's, and Hans Taylor Plumbing. Joe also seemed to have passed down his pitching arm to his grandson Charlie. He also attended Monmouth University and then graduated Temple University with a degree in Architecture. Joe was a construction foreman for Arthur R. Henry Inc., Contractors and Engineers, for over 35 years. Joe was well known for his admirable collection of hot rods and classic cars. He looked forward to car shows every weekend with his buddies whom mean the world to him. Winning 1st place trophies brought a smile to his face, too. He also served in the Air National Guard and United States Air Force from 1964 to 1972 and was stationed at Seymour Johnson Air Force Base. In September of 1968, he married the love of his life, Vivian Smallwood, also of Port Republic. They enjoyed many years of vacations and get-togethers just the two of them, before having their son and daughter, Joey and Leann. Nothing made Joe happier than being the best father to Joey and Leann and the best grandfather to Charlie and Jonathan that anyone could ask for. Even if he wasn’t the coach of their teams, he wouldn’t miss a game or a practice. He loved getting their shoes on and going out for a catch. Joe was always there to help them from problems in math to problems getting their cars out of places they shouldn’t have been. No matter what he was always there to help and nothing was more important than his kids. “Grow old with me, the best is yet to be.” Joe is survived by his wife, Vivian; his son, Joseph; daughter, Leann; and his grandchildren, Charles Waldmann IV and Jonathan Feeley. He is predeceased by his father, Joseph Sr. and Florence. A visitation will be held on Sunday, August 6th from 1:00 to 3:00 PM with a service at 3:00 PM at Wimberg Funeral Home, 211 E. Great Creek Rd, Galloway 609-641-0001. Interment will immediately follow at St. Paul Methodist Church Cemetery in Port Republic. Memorial donations may be made to the Heart Association. For condolences or directions, please visit wimbergfuneralhome.com.

The family of Joseph Alton Loveland created this Life Tributes page to make it easy to share your memories.

Send flowers to the Loveland family.