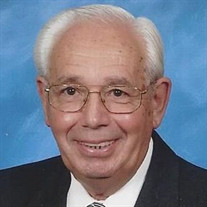 Joseph A. Kuehner, Sr., 88 passed away peacefully with his loving family by his side on Thursday, April 12, 2018. Joe was a lifelong resident of Egg Harbor City, born on July 1, 1929 in the house he lived in his entire life. He attended St. Nicholas School and graduated from Egg Harbor City High School in 1947. Joe went to meat cutting school in Philadelphia and opened Kuehner’s Market with his parents in 1948. After marriage in 1949, he and his wife, Marie ran the business until 1984. After closing the store, he worked at Trump Plaza Casino as a meat cutter and later transferred to Caesar’s Casino as a Carpenter. He was a Local 255 member of the Carpenter’s Union. He was also a self-taught locksmith. Joe attended St. Nicholas Church and was a Eucharistic Minister and Alter Server for many years. He was a member of Knights of Columbus Council #3500, a member of the 4th Degree and former Grand Knight. Joe was Chairman of the EHC Zoning Board for many years. Joe is predeceased by his parents, Albert and Rose (Laubert) Kuehner; his wife, Marie “Petitti”; his grandson, Harold Gerhardt; and his brother, Raymond J. Kuehner, Sr. Joe is survived by his four children, Lana (John) deRuyter, Karen (Jack) Corbett, Joseph Jr. (Stefania) and John (Barbara); ten Grandchildren, Michelle (Scott) Aaron, Hal (Linda) Gerhardt, Jack (Kait) Corbett, Jenna (Russ) Cook, Esq., Joseph III, Rose (Rob) Prettyman, Diana (Bill) Homer, Dr. Jennifer (Wayne) Stephens and Alyssa Kuehner; 21 Great Grandchildren; 6 Great-Great Grandchildren; his brother, Albert (Leona) Kuehner; and his sister-in-law, Connie Kuehner. Joe loved his family being together, boating, fishing, going to the College of Knowledge (the Hut), playing Canasta with friends, and Cape May Salt Oysters! Joe loved Egg Harbor City and was proud to tell people he lived here. A visitation will be held on Monday, April 16th from 5:00 to 8:30 PM at Wimberg Funeral Home, 400 Liverpool Ave, Egg Harbor City 609-965-0357. A Mass of Christian Burial will be held on Tuesday, April 17th at 10:00 AM at St. Nicholas Church, 525 St. Louis Ave, Egg Harbor City. Interment will immediately follow at Egg Harbor City Cemetery. In lieu of flowers, donations may be made to the Knights of Columbus, 304 Arago St. Egg Harbor City, NJ 08215. For condolences or directions, please visit wimbergfuneralhome.com

Joseph A. Kuehner, Sr., 88 passed away peacefully with his loving family by his side on Thursday, April 12, 2018. Joe was a lifelong resident of Egg Harbor City, born on July 1, 1929 in the house he lived in his entire life. He attended St.... View Obituary & Service Information

The family of Joseph A Kuehner Sr. created this Life Tributes page to make it easy to share your memories.

Joseph A. Kuehner, Sr., 88 passed away peacefully with his loving...

Send flowers to the Kuehner family.