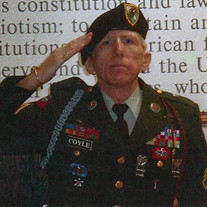 SSG Joseph Michael Coyle Sr., of Egg Harbor Twp. and most recently Vineland Veterans Home, passed away peacefully of a lengthy illness on April 10, 2019 at the age of 67 year old. Joe would want to be remembered by his loved ones and friends for his love of art. Joe was a wonderful artist. As well as his many other talents. Joe also took pride in doing his family ancestry from Ireland, with his now deceased uncle, Rev. Patrick J. Coyle SM. He enjoyed his visits with his son, Joseph and his grandchildren. Joe served his country in the United States Army. He served in Vietnam with the 173 Airborne Brigade. He was known as “Spider” to all that knew him in his brigade. Joe was so proud of the spider tattoo on his arm. Joe also served as an assistant Pastor for a short time in his church in Egg Harbor Township. He had a passion for Martial Arts. Joe worked his way up to a Black Belt. He then went off to school to receive his degree in Cheon Mu Sool, Joe ranked 1st in his class. He then went on to teach his own classes too many students in South Jersey. He took great pleasure doing what he loved. Joe is preceded in death by his mother, Mary Coyle; his father, Cornelius Coyle; his brothers, Thomas and Patrick Coyle; and his sisters, Mary Jane Coffee and Margaret Glaven. Joe is survived by his son, Joseph M. Coyle Jr.; his daughter, Kim Breviti; his grandchildren, Kamron, Tatuman, Ethan and Noah Coyle and Jakson Breviti; his siblings, Cathrine Hewitt, Patricia Coyle, Cornelius Coyle (Terry), Anna Marie Kulesa (Edward), Timothy Coyle (Kim), John Coyle (Terri), Matthew Coyle (Ellen), Michael Coyle (Lisa), Elizabeth Schoenstein (Henry) and Theresa Schweighardt; and many nieces and nephews. At the request of the family services will be private. Memorial contributions may be made to the Veterans Administration in memory of SSG. Joseph Michael Coyle, Sr.

SSG Joseph Michael Coyle Sr., of Egg Harbor Twp. and most recently Vineland Veterans Home, passed away peacefully of a lengthy illness on April 10, 2019 at the age of 67 year old. Joe would want to be remembered by his loved ones and friends... View Obituary & Service Information

The family of SSG Joseph Michael Coyle Sr. created this Life Tributes page to make it easy to share your memories.

Send flowers to the Coyle family.