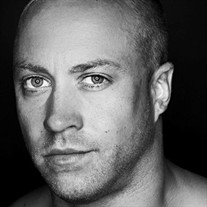 Jonathan J. Graham, 37, of Westfield, NJ died in a fatal hit and run in Florida on July 15, 2020. Born January 11, 1983 to Joseph and Susan Graham. He was raised in Garwood, NJ alongside his siblings Melissa (Patrick) and Zachary. Jonathan moved to the town of Westfield where he attended Westfield High School. After high school, Jonathan served in the United States Navy on the USS Nimitz in San Diego and later went on to join the Heavy and General Construction Laborers Local 472 through Crisdel Construction Corp. Since a young age, Jonathan loved spending time outdoors riding his dirt bike, snowboarding, and hunting and fishing with his father. When he wasn’t enjoying the outdoors, you could find Jonathan watching movies with his sister, often memorizing their favorite movie quotes together. Growing up Jonathan excelled at any sport he tried and as he entered high school he found a love for lacrosse. Spending time around Jonathan was never dull. He could take over a room with his sense of humor and his genuine nature would leave a lasting impression. His love of music kept a bounce in his step where he would often march to the beat of his own drum. Jonathan always had a knack for cooking which only fueled his passion for fitness even further. On September 11, 2011, Jonathan’s son, Jacob was born. Jonathan spent his time sharing his love of sports and the outdoors with his son, passing on his knowledge wherever he could. Jonathan and Jacob would also spend time riding dirt bikes and quads, bowling, playing paintball, and having fun at various water parks. Jonathan is survived by his son Jacob, father and step-mother Joseph and Fran, sister and brother-in-law Melissa and Patrick, brother Zachary, and his mother Susan. A private service will be held for family and friends. In lieu of flowers, please consider donating to commongroundgriefcenter.org in memory of Jonathan Graham. For condolences, please visit wimbergfuneralhome.com.

Jonathan J. Graham, 37, of Westfield, NJ died in a fatal hit and run in Florida on July 15, 2020. Born January 11, 1983 to Joseph and Susan Graham. He was raised in Garwood, NJ alongside his siblings Melissa (Patrick) and Zachary. Jonathan... View Obituary & Service Information

The family of Jonathan J Graham created this Life Tributes page to make it easy to share your memories.

Send flowers to the Graham family.