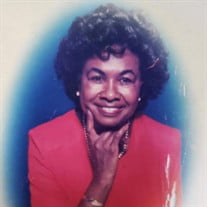 Dr. Johnea D. Kelley passed away on Sunday, April 4, 2021. She was born to the late King Solomon Burns and Irene Mays Burns on July 27, 1928 in Egg Harbor City, New Jersey. Johnea was preceded in death by her husband Robert O. Kelley, her father, King Solomon Burns, her mother Irene Mays Burns, four of her sisters Arlene Lawrence, Christine Woods, Pearl Derry, and Sylvia Burns. Johnea was married to Robert for 43 years. Robert is now with his “honey” that he affectionately called her. Johnea had a smile that would light up an entire room. Wherever she spoke, taught, traveled, visited and even in her final hour she was smiling. Johnea gave her life to Christ at an early age at the Church of Living God under the instruction of her Uncle, Bishop Clifford Casey Mays Sr. She would later go on to be a dedicated and faithful member of Peace Missionary Baptist Church in Durham, North Carolina. She loved the Lord & her church family. In her early years, Johnea was educated in the Egg Harbor City public school system. This was only the beginning of her greatness and achievements. She had to soar from this point on! Johnea’s formal education was from Teachers College, Columbia University (New York City NY where she obtained a Master of Arts and a Bachelor of Science Degree in Nursing. After leaving Columbia University, Johnea went on to Pre-Med at Temple University in Philadelphia, PA. As all of you know, Johnea could not stop there. Johnea went onto University of North Carolina in Chapel Hill, NC to obtain her Doctorate Degree in Public Health. Dr. Johnea D. Kelley achieved the highest level of educational accomplishments, so now she had to make a difference in her career field for human betterment on a global basis. During Johnea’s career at North Carolina Central University in Durham, NC (1976-2001), she served as Associate Professor of Nursing, Department Chair, Associate Dean of Graduate Programs, and Acting Chair, Department of Nursing. Johnea had many first as a Doctor of Nursing. First black female to graduate from the School of public health, first black admitted to Sigma Theta Tau Honor Society in North Carolina, first black to head aa nursing program in North Carolina with doctoral degree (NCCU). So many other first and accomplishments (see handout). A visitation will be held on Tuesday, April 13th from 10:00 to 10:30 AM will a service at 10:30 at Wimberg Funeral Home, 400 Liverpool Ave, Egg Harbor City 609-965-0357. Interment will follow at Egg Harbor City Cemetery. For condolences or directions, please visit wimbergfuneralhome.com. Please join us for the service live by clicking on the link at 10:15 AM on Tuesday, April 13th; https://webcast.funeralvue.com/events/viewer/51725

The family of Dr. Johnea D Kelley created this Life Tributes page to make it easy to share your memories.

Send flowers to the Kelley family.