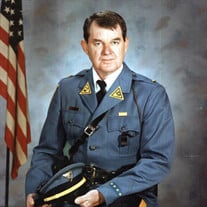 John C. Thompson Sr., 75, of Mullica Twp., passed away on April 22, 2021. He was raised in Bellmawr Park and Turnersville Area. John enlisted in the USMC in 1964, where he was assigned to the USS Wasp aircraft carrier. One of the Wasp’s missions was to recover the Gemini space craft, which John took great pride in. He was honorably discharged in 1967 as a Lance Corporal. In 1966, John started dating a girl from the local neighborhood that he knew for years. That girl, Rosalyn quickly became the love of his life. In 1969, John and Roz got married. This was the same year that he enrolled in the NJSP. HE graduated from the 80th class in February 1970. In 1975, they moved into the house that John and all his buddies built in Mullica Twp. In the NJSP, John was assigned to various stations in Troop A. He was assigned to the TAC-PAC, Dive Team and then was a founding member of the NJSP Troop A T.E.A.M.S. formed in 1978. In 1980, he was transferred to the NJSP Heavy Rescue School as an instructor. At the time, the Heavy Rescue School was only one of a few on the East Coast that offered training in High Angle Rescue techniques. John then found his real niche in his law enforcement career, Emergency Management. John spent 15 years assigned to OEM. The office of Emergency Management was something John was very passionate about. Over the years, he got to work with many first responders, government officials and military planning and educating. John retired from the NJSP in 1996 and took a position as the Atlantic County Emergency Management Coordinator. In 1998, he began his employment with FEMA, where he worked for 15 years serving on many federal disasters also being assigned to the 9/11 recovery efforts in New York City. John’s family came first, his vegetable garden came a close second. John spent many moments waiting for the tomatoes to turn red, constantly checking the vines. John loved hanging out with his grandkids. He bonded with each in different ways. John held family, honor, and pride as probably the three biggest principals in life. He was a proud husband, father, grandfather, Marine and Trooper, who loved his family. He is predeceased by his sister, Cathy and his grandson, Oscar. John is survived by his wife of 52 years, Rosalyn; his son, John Jr of Mullica Twp.; his daughter-in-law, Dawn; his grandson, Jacob; and granddaughter, Carley; his daughter, Lisa Thompson of Flagstaff, AZ; his grandson, Lief; and his brother, William (Nancy) of Williamstown. A gathering will be held on Tuesday, April 27th from 9:00 to 11:00 AM with a service at 11:00 AM at Wimberg Funeral Home, 400 Liverpool Ave, Egg Harbor City 609-965-0357. Interment will immediately follow at Atlantic County Veterans Cemetery in Mays Landing. For condolences or directions, please visit wimbergfuneralhome.com. In lieu of flowers, donations may be made to the Cape Atlantic Marine Corp League, PO Box 118, Absecon, NJ 08201. Please click on the link to watch the service live on Tuesday, April 4/26/21 at 10:45 AM; https://webcast.funeralvue.com/events/viewer/52939

John C. Thompson Sr., 75, of Mullica Twp., passed away on April 22, 2021. He was raised in Bellmawr Park and Turnersville Area. John enlisted in the USMC in 1964, where he was assigned to the USS Wasp aircraft carrier. One of the Wasp&#8217;s... View Obituary & Service Information

The family of John C Thompson Sr. created this Life Tributes page to make it easy to share your memories.

Send flowers to the Thompson family.