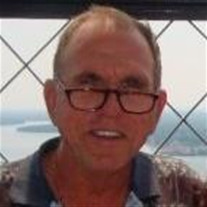 John P. Kelly (Jack), 63, passed away peacefully in his home in Port Republic, New Jersey surrounded by his family and friends on March 5th, 2017. He was born on November 17th, 1953 in Newark, New Jersey to Robert and Mary Kelly and lived his early life in East Brunswick and graduated from Toms River High School North in 1972. After achieving a Master Plumber designation, he founded JP Plumbing & Heating, and successfully served the Lavallette area for many years. A consummate learner, he obtained his plumbing, electrical, fire, and building sub-code licenses and, after selling his business, was employed as a Plumbing and Fire Sub-Code Official in Little Egg Harbor Township and Construction Official and Inspector in Port Republic. Jack was a life force that brought laughter, energy and love to every interaction he had. A devoted friend and husband, he loved music, was passionate in his faith, willing to do anything for anyone in need, and was a role model for all of the many lives he touched. He thrived on spending time with family and friends and was a father figure to Luca Mazzille and Brittany Greenway, attending countless lacrosse and little league games, camping and fishing excursions and enduring numerous white knuckle “student driver” trips, as well as being a concert chaperone. Although they were not his biological children, he could not have loved them more. Luca and Brittany were the children of his heart. Jack is survived by his loving wife of 24 years, Doreen Kelly; his daughter Giselle; brothers Bobby (wife Ann) and Bruce; sisters Donna (husband Jay) and Mary (husband Dave); and many, many friends and extended family. We will miss him dearly, but know he is in God’s caring hands and look forward to seeing him again. Arrangements entrusted to Wimberg Funeral Home, 211 E. Great Creek Rd., Galloway, NJ 08205 609-641-0001. For condolences, please visit wimbergfuneralhome.com. In lieu of flowers, please consider a donation in Jack’s memory to: St. Paul’s United Methodist Church, P.O. Box 283, Port Republic, NJ 08241.

John P. Kelly (Jack), 63, passed away peacefully in his home in Port Republic, New Jersey surrounded by his family and friends on March 5th, 2017. He was born on November 17th, 1953 in Newark, New Jersey to Robert and Mary Kelly and lived his... View Obituary & Service Information

The family of John P Kelly created this Life Tributes page to make it easy to share your memories.

Send flowers to the Kelly family.