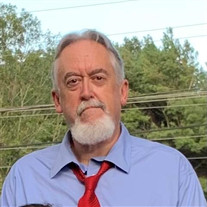 John W. Grunow, 63, of Mullica Township passed away October 15th, 2021. Preceded in death by his parents, Dolores and Jack Grunow as well as his grandson, Johnny Lopez, Jr. John was a graduate of St. Thomas University and Hamline University School of Law in Minnesota. He worked as a career prosecutor until retirement in 2015. Although retired, he kept himself busy with cheering on his family at ballgames, being the family chauffer, volunteering at St. Nicholas Church and 4-H events, such as the 4H Fair Chicken BBQ, and car show chairman. A selfless, giving man till the end, he did whatever was needed for everyone. His family was his world and he was theirs. John was a Star Trek fan and Disney fanatic, passing on his love for Disney to his children and grandchildren. John was the family videographer, played a little guitar, collected model race cars, and was proud to show his concert and Disney ticket stubs he had displayed. He would happily plan and give you an itinerary for your Disney trip advising you as to what to do and where to go first. He had been anticipating bringing his whole family to celebrate Disney’s 50th Anniversary next month, and was excited to recreate a photo he had taken at Disney’s opening as a child. He will be dearly missed by all! John is survived by his loving wife, Joni, whom he adored; as well as, his children, Lori Lopez (Johnny) and Christopher Grunow (Sarah); his grandchildren, Almary Lopez (Opal), Brianna Rosario (Tyler), Serena & Anthony Lopez, Chris, Mason & Sophia Grunow; and his great-grandson, Easton Rosario. Mass of Christian Burial at St. Nicholas Church will be private and a Memorial Service will be held at a later date. Arrangements have been entrusted to Wimberg Funeral Home in Egg Harbor City, 609-965-0357. For condolences, please visit wimbergfuneralhome.com.

John W. Grunow, 63, of Mullica Township passed away October 15th, 2021. Preceded in death by his parents, Dolores and Jack Grunow as well as his grandson, Johnny Lopez, Jr. John was a graduate of St. Thomas University and Hamline University... View Obituary & Service Information

The family of John W Grunow Jr. created this Life Tributes page to make it easy to share your memories.