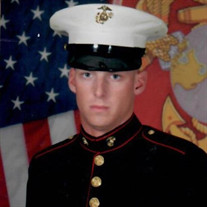 With deepest sorrow, the family of John Thomas Eaton “Jake”, age 32, announce his passing on June 13, 2020. Jake grew up in Northfield, NJ, recently residing in Philadelphia, PA. Jake attended Mainland Regional High School and Stockton University. His strong sense of patriotism led him to proudly enlist in the United States Marine Corps Reserve. Jake became an Aircraft Firefighting and Rescue Specialist MWSS-472. A combat veteran, Jake faithfully served during Operation Iraqi Freedom, where he rose to the level of Corporal and was awarded numerous medals and ribbons for his bravery and valor. He was honorably discharged in 2014. While in the Marines, Jake found lifelong friends, whom he called brothers. Jake continued to exemplify the Marine spirit of Semper Fidelis throughout his life. Once out of the military, Jake had a successful career in the restaurant business, managing restaurants in Atlantic City and Las Vegas. Jake felt that his true calling was in helping people, especially other Veterans, and was returning to school in the fall to pursue Social Work. Jake will always be remembered for his intelligence, quick wit and unique sense of humor, and his interest in comedy. Jake joked that his alter ego was actually a stand-up comedian. Jake didn’t mind being the brunt of his own joke. Jake was preceded in death by his grandparents John and Kathleen Eaton, George and Rose Miller, and Uncle George Miller. The much beloved son of Sandra Eaton and Jack T. Eaton, Jake is also survived by his sisters Katie and Lexi Eaton, and brother Sean Eaton. He is also survived by many aunts, uncles, cousins, and friends who will cherish his memory. A service celebrating Jake’s life will be held on Saturday, June 20 from 1:00 pm-3:00 pm. at Wimberg Funeral Home located at 211 E. Great Creek Rd., Galloway, NJ. Friends and family are invited to call. Condolences can be sent to the family at wimbergfuneralhome.com. In lieu of flowers, memorial contributions in Jake’s name can be made to Semper Fi Fund at semperfifund.org

The family of John Thomas "Jake" Eaton created this Life Tributes page to make it easy to share your memories.

With deepest sorrow, the family of John Thomas Eaton “Jake”,...

Send flowers to the Eaton family.