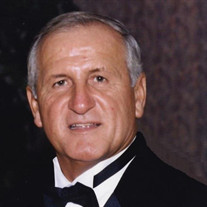 John DeFilippis, 73, of Galloway, NJ passed away on 1/23/21 at 9:49 pm at AtlantiCare Regional Medical Center. Funeral services will be held at 11:00 am on Friday, February 5th, 2021 at Our Lady of Perpetual Help, 146 S. Pitney Road, Galloway, NJ 08205. Visitation will be held from 2:00 pm to 6:00 pm on Thursday, February 4th, at Wimberg Funeral Home, 211 East Great Creek Road, Galloway, NJ 08205. Mr. DeFilippis was born on 1/21/48 in Bayonne, NJ. A graduate of Mary J. Donohoe School and Bayonne High School, John went on to work at Western Electric in Kearny, NJ before enlisting in the US Marine Corps in 1969. After Boot Camp at Parris Island, SC, where he was rated in the top 10% of his class and awarded promotion to Private First Class (PFC), John reported for advanced training at Camp Lejeune, NC. His next permanent assignment was to Marine Corps Air Station Beaufort, SC in January 1970 where he worked as a supply stock control and tech edit clerk in support of F-4 Phantom, A-6 Intruder, and Harrier jets. In August of 1970, John was promoted to Corporal and assigned to Naval Air Station Boca Chica, Key West FL for 90 days to support Navy reconnaissance missions around Cuba. John’s expertise in supply support to critical aircraft operations at Beaufort and Boca Chica was recognized by his Commander who awarded him a USMC Meritorious Mast. While at Beaufort, John also found time to marry his hometown sweetheart, Amy. He left active duty in May 1971 and remained in the reserves until 1975 while beginning a career with Amtrak Long Island Railroad. John went on to work at Amtrak for over 30 years, ultimately finishing his career as a Foreman in the Electric Traction Department before retiring to Galloway, NJ. In retirement, John spent most of his time fishing, frequenting Atlantic City and Brigantine Beach, taking annual vacations to Aruba and Pompano Beach, FL, and cheering on his favorite teams, the New York Yankees and New York Giants. John is survived by his wife, Amelia DeFilippis; two sons, John and James DeFilippis; two grandsons, Matthew and Mark DeFilippis; and his brother, Joseph DeFilippis. In lieu of flowers, contributions may be made to the National MPS Society, PO Box 14686, Durham, NC 27709-4686. For condolences, directions and live stream link, please visit wimbergfuneralhome.com. Join us live on Thursday, February 4th for the visitation by 1:45 PM on the link; https://webcast.funeralvue.com/events/viewer/46545 And again live for the Mass on Friday, February 5th at 10:45 AM at the link; https://webcast.funeralvue.com/events/viewer/46547

The family of John DeFilippis created this Life Tributes page to make it easy to share your memories.

Send flowers to the DeFilippis family.