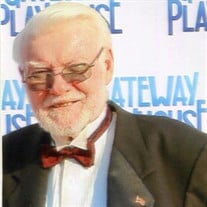 John W. Burke, 87, of Galloway, NJ died peacefully at home with family at his side on Saturday evening, January 9, 2021. He was born 2 years after his sister Veronica on December 27, 1933 in Brooklyn, NY to George and Mary (Hogan) Burke. John was first generation Irish. His mother immigrated to America to Ellis Island at age 15. John loved everything Irish and readily slipped into an Irish brogue in the middle of conversation without batting an eye! John served in the US Army Dental Corps before establishing his career as an insurance executive taking him and his family to the Falls Church, VA, Northern NJ, Philadelphia and South Jersey. After retirement John earned a degree in Addictions Counseling and served in a Methadone Clinic in South Philadelphia. He served as a concierge at the Sheraton Society Hill before formally engaging his thespian spirit offering tours in authentic, colonial costume in the historic district of Philadelphia. John let the historic park service give their brand of the tour inside the buildings while John told the rest/best of the story outside. Kids trailed after him like the Pied Piper because he gave prizes for questions asked and answered given, right or wrong to his unending series of questions. A devotee of musical and dramatic theater and opera he was a longtime member of the Charlotte Cushman Club, now a foundation in Philadelphia, and the Gli Amanti del Opera Club of South Jersey. Most recently, he supported and loved the Gateway Playhouse on Bay Ave in Somers Point. John’s love of travel took him to numerus European counties including his beloved Ireland, a country he visited many times. While John was engaged giving tours, he also volunteered at St. Joseph’s Men’s Homeless Outreach Program setting up their first on line data base to pair level of need to available services. For many years John served as a volunteer at the St. Francis Inn Soup Kitchen in Kensington, PA where he and others made hearty and nourishing soups in a 4-foot-tall pot so rich and thick he needed a canoe oar to stir the soup. He loved it! A flawed and fragile individual like us all, John had a kind and generous heart. He will always be remembered as a poet, Pop/Dad, PopPop, Uncle Johnny, world traveler and world class storyteller. An all-around great guy, John will long be remembered for his courage, generous and loving spirit, his joy of living ever enriching us with his Irish heritage in song and his irreplaceable homemade soda bread, always a staple at every Burke gathering. He was preceded in death by his wife, Bridget Marie; his son, Joseph; his sister, Veronica; his brother-in-law, Bob; his grandson, Jake; and his nephew, Charlie. Surviving are his children, Maura (Rick), John Jr. (Sally), Christopher, Tim, Terence (Christine), Sheila, Rose and Julie; his nephew, Robert; his nieces, Debbie (Jim), Evelyn; his beloved grandchildren and great -grandchildren; and his wife, Betty. Arrangements have been entrusted to Wimberg Funeral Home, 211 E. Great Creek Rd., Galloway 609-641-0001. For condolences, please visit wimbergfuneralhome.com. Memorial contributions may be made to/In lieu of flowers to St. Francis Inn, 2441 Kensington Ave., PO Box 3746, Philadelphia, PAS 19125, (215) 423-5845 OR (215) 880-7045.

John W. Burke, 87, of Galloway, NJ died peacefully at home with family at his side on Saturday evening, January 9, 2021. He was born 2 years after his sister Veronica on December 27, 1933 in Brooklyn, NY to George and Mary (Hogan) Burke.... View Obituary & Service Information

The family of John W Burke created this Life Tributes page to make it easy to share your memories.

Send flowers to the Burke family.