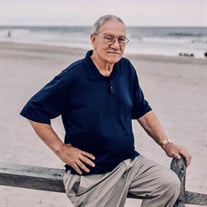 Joel Alan Spiegel, 72, of Folsom, NJ, passed away peacefully at the Hospital of the University of Pennsylvania surrounded by his loved ones on Friday, October 22, 2021, after a courageous 8-month battle with cancer. He had the opportunity to say ‘goodbye’ to so many people, including his beloved grandchildren, friends and family. Joel was born in New York City and spent the first four years of his life living in Easton, PA and the remainder of his childhood in Carteret, NJ. He attended Drexel University where he played football, majored in Commerce & Engineering, and was a member of Alpha Pi Lambda (“Apple Pi”) fraternity where he made many lifelong friends. He worked as an industrial/manufacturing engineer for several companies including 3M in Thorofare where he worked for 21 years, and later reinvented himself as a packaging engineer and worked for Kimble Glass and Wheaton Science Products in Millville until his retirement. He was an avid New York Giants and Philadelphia Flyers fan. Joel was a devoted American Red Cross blood donor. He served on the Great Egg Harbor River Council and the Folsom Boro Environmental Planning Commission and Planning and Zoning board, and he was named Folsom’s 2016 Citizen of the Year. He coached youth sports, and was an active member of the Alpha Pi Lambda Alumni Association. He volunteered for the United Way of Cape May County, the Shoprite LPGA Classic, and generously supported many other charitable causes. Some of his most cherished memories included the many years he spent with his daughters in a YMCA father-daughter organization. But one of his greatest joys in life was being “Poppa” to his grandchildren, Quinn and Sasha. They filled his last years with so much love. Joel lived his life with no regrets. In a video he made the day before he passed away, Joel shared these important words: “Friends and family are everything - remember that.” Joel was preceded in death by his parents, Alfred and Nettie. He is survived by his loving wife, Mary Beth (Eisenlohr) Spiegel; his daughters, Beth Ann (Michael) and Kimberly; his grandchildren, Quinn and Sasha; his brother, Mark; his sister, Shari Kingman; and extended family. In lieu of flowers, the family requests that you consider donating blood to the American Red Cross in Joel’s honor, or making a contribution to Penn Medicine Lung Cancer Research, ℅ Penn Medicine Development Office, 3535 Market Street, Suite 750, Philadelphia, PA 19104. Gathering will take place on Saturday, October 30, from 1pm - 3:00 p.m. followed by a service and celebration of life, at Wimberg Funeral Home, 400 Liverpool Avenue, Egg Harbor City, 609-965-0357. For condolences or directions, please visit wimbergfuneralhome.com. Per Joel's request, everyone is encouraged to attend a post service celebration at a family members home. Further information will be provided after the service. Please join us live at 2:45 PM on 10/30 for the service; https://webcast.funeralvue.com/events/viewer/62895

Joel Alan Spiegel, 72, of Folsom, NJ, passed away peacefully at the Hospital of the University of Pennsylvania surrounded by his loved ones on Friday, October 22, 2021, after a courageous 8-month battle with cancer. He had the opportunity to... View Obituary & Service Information

Send flowers to the Spiegel family.