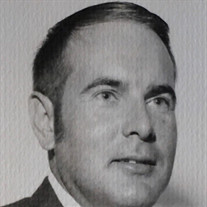 Jerry Joseph Wagenhoffer, 82, of Smithville, passed away in Estero, FL, on April 23, 2021. A prostate cancer survivor, he died of a sudden heart attack. Jerry was born on October 20, 1938 to Mamie and Joe Wagenhoffer. A graduate of Woodbridge High School and Rider College. Jerry is survived by his wife of 55 years, Judy (Confroy); his son, Craig Wagenhoffer of Worcester MA; his daughter, Noelle Stephens of Brunswick, MD; his granddaughters, Jenny Wagenhoffer and Sabrina Stephens; and his beloved Siamese cat who misses him dearly. He was a loving son to mother, Mamie and father, Joe. His working life included Wagenhoffer Manufacturing Co., Laurel Raceway, and Senator Shipping Line. A resident of North Brunswick, NJ, for 37 years, Jerry gained much pleasure from coaching his son's soccer team and played on numerous softball teams. Jerry and Judy retired to the Four Seasons in Smithville, NJ, in 2002, where Jerry lived the "Active Lifestyle" to the fullest and loved being a snowbird at the Villagio in Estero, FL. He had a great time playing bocci at teams in both locations, loved playing poker with the Four Seasons and Villagio boys and belonged to the Ancient Mariners at the Four Seasons. At Rider College, he played soccer and was a member of the TKE fraternity, where he still regularly got together with his brothers and always had a good time. He served in the Army at Fort Knox, KY, was a member of the American Legion and the Veterans of Foreign Wars. Jerry was a true extrovert, and the family is welcoming all who may have crossed his path, to share in a celebration of life. The viewing will be held on Tuesday, May 4th from 2pm to 4pm at Wimberg Funeral Home, 211 E. Great Creek Road, Galloway 609-641-0001 with a repast to follow. Interment will take place privately at the Atlantic County Veterans Cemetery in Estell Manor. For directions or condolences, please visit wimbergfuneralhome.com. In lieu of donations and flowers, the family is asking the surf fishermen of the Jersey Shore to crack open a Miller Lite in honor of Jerry as they reel in their next catch.

Jerry Joseph Wagenhoffer, 82, of Smithville, passed away in Estero, FL, on April 23, 2021. A prostate cancer survivor, he died of a sudden heart attack. Jerry was born on October 20, 1938 to Mamie and Joe Wagenhoffer. A graduate of Woodbridge... View Obituary & Service Information

The family of Jerry Joseph Wagenhoffer created this Life Tributes page to make it easy to share your memories.

Jerry Joseph Wagenhoffer, 82, of Smithville, passed away in Estero,...

Send flowers to the Wagenhoffer family.