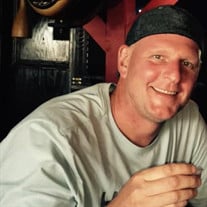 SCHWARZENBACH, JASON (BIG JAY), - 51, of Egg Harbor City, passed away at home, surrounded by family early morning on Thursday, September 30th after a 2-year courageous battle with pancreatic cancer. He was born in Wichita, Kansas. As an infant, he moved to Egg Harbor City where he became a lifelong resident. Jason is survived by his loving wife of 15 years, Dana (Scull) and their border collie mix Maci; parents Everett and Melanie; sister Heather; niece Lyric; stepmother Patty and her children Jeff, Jake and Jill, as well as several aunts, uncles and cousins. He is predeceased by his grandparents, aunts and uncles. Jason was a graduate of Absegami High School. He furthered his education at Penn State, Behrend Campus, after receiving a basketball scholarship. Eventually, his passion for art superseded his love for the game. He then attended and graduated from the Art Institute of Philadelphia. Following college, he began a career at AC Coin and Slot where his talent through art emerged. It was there that he met Dana. After years of dating, they purchased an old farmhouse down Linden Lane where his creative abilities continued. They both worked hard, creating their dream home which led to his proposal to Dana in a way which validated his originality. Dana was on the receiving end of a threaded electrical wire holding an engagement ring. It was then he got down on one knee and asked her to become his wife. They were married at Renault Winery in the Fall of 2006. Jason had a love for music and television and was also known for being a history buff. At a young age, he enjoyed restoring cars, and as an adult, he loved working on his pickup truck. He valued time spent with his dog Maci, who he nicknamed “Sugar Tank”. He would spend days tinkering in his garage. He also took great pride in owning the title of Uncle Jay to his niece Lyric. In 2015 he joined the carpentry union Local #195 at Stockton University. During his years at Stockton, he continued to effortlessly excel in his craftsmanship. However, his true enjoyment was in the friendships that were made. Jason’s friends, both old and new, his love for his family and the amazing medical team at Thomas Jefferson University collectively were the catalyst that carried him in his final years. Jason’s family will be forever grateful for the seamless care and compassion that the medical team delivered. Jason was a gentle giant who will be sorely missed and forever remembered. A viewing will be held on Saturday, October 9th from 2:00pm to 4:00pm, followed by a brief service at Wimberg Funeral Home, 400 Liverpool Avenue, Egg Harbor City, NJ. Casual clothing is encouraged - come as Jason knew you. In Lieu of flowers, donations in Jason’s name may be made to "Jefferson.edu/givesurgery" Online condolences can be left for the family at www.wimbergfuneral.com. Arrangements entrusted to Wimberg Funeral Home, Egg Harbor City, NJ

SCHWARZENBACH, JASON (BIG JAY), - 51, of Egg Harbor City, passed away at home, surrounded by family early morning on Thursday, September 30th after a 2-year courageous battle with pancreatic cancer. He was born in Wichita, Kansas. As an infant,... View Obituary & Service Information

The family of Jason (Big Jay) Schwarzenbach created this Life Tributes page to make it easy to share your memories.

Send flowers to the Schwarzenbach family.