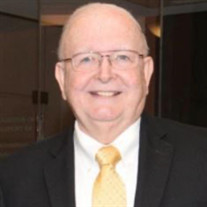 James E. McGeary, Mayor Emeritus, 77, of Egg Harbor City, crossed over to eternal life on Thursday, April 2, 2020. Jim was the son of the late Francis and Josephine (nee Schuster) McGeary.  He attended St. Nicholas Grammar School then went on to St. Joseph’s High School. Jim attended Rutgers University Camden and Rutgers School of Law.  He became a member of the bar in 1970.  His career spanned from Associate Attorney at Cape Atlantic Legal Services to Assistant Prosecutor of Atlantic County. Jim was in private practice in Egg Harbor City until 2019. During his time as Egg Harbor City’s senior attorney, Jim provided many pro bono legal services to the community including local schools. Jim served as Mayor of Egg Harbor City from 1989 to 2004.  His accomplishments to include: former President of Kiwanis Egg Harbor City, District Governor NJ District Kiwanis, President Atlantic County Mayor’s Association, President of Atlantic County League of Municipalities and President of St. Joseph’s High School (Class of 1960) Alumni Association. His accolades include Grand Knight in the Knights of Columbus. He was a well-respected member of the US Military Academy’s Admissions Field Force identifying, mentoring and sponsoring the very best of New Jersey’s student-leader-athletes and facilitating their entry into and graduation from West Point. Up until recently, Jim was an active parishioner and reader at St. Nicholas Church. He is predeceased by his brother, Thomas, Sr. and sister, Kathleen. Jim is survived by many nieces and nephews.  He will be greatly missed by all those who knew him. Jim was a gentleman of impeccable honor, extraordinary wisdom and selfless service to God, the people of Egg Harbor City and his country.   If you wish to honor Jim’s life and in lieu of flowers, please donate in his memory to: St. Joseph’s High School, 328 Vine St., Hammonton, NJ 08037. A recording of the graveside service will be available after 2:00 PM on Monday, via http://client.tribucast.com/tcid/98652784. Arrangements have been entrusted to Wimberg Funeral Home, 400 Liverpool Ave, Egg Harbor City 609-965-0357.  For condolences, please visit wimbergfuneralhome.com.

The family of James McGeary Esq. created this Life Tributes page to make it easy to share your memories.

Send flowers to the McGeary family.