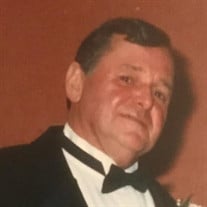 James Richard Brown Sr, 79, of Mullica Twp., passed away on January 9, 2021 at home in the arms of his loving wife Mary, surrounded by his loving family. He was born in Camden, NJ. When Jim was young, he spent a lot of time with his Uncle Jim Harris, huckstering fruits and vegetables from the back of a flatbed Dodge on the streets of Camden. The knowledge he gained in his early years would later serve him well in life. In high school, he opted to attend Camden County Vo Tec and studied Horticulture. This also added to the expertise he would draw on in his later career. After graduating he took a job with Quey’s Florist. He went to work with his father at Buzby Brothers manufacturing and shipping Sack-Crete concrete. He took a job with Steve Musial as an electrician and eventually was laid off from lack of work. He saw an ad in the paper for a produce clerk at ShopRite and went for the job, where his earlier produce and horticulture skills paid off. That ShopRite eventually became one of the original Pathmarks and Jim had a long successful career which included Produce/Floral Product Manager for the entire Southern Division of Pathmark Supermarkets. He retired from Pathmark as store manager in 2006. Along the way he spent many years as Mullica Township’s Mayor. He opened 40 Acre Farms specializing in a landscaping and nursery business. He also served on the board for various leadership committees including as President of the Atlantic County League of Municipalities and The Atlantic County Mayors Association. Jim was also a very active member of the Weekstown Community Church and extremely involved in the construction of the new Church Building. Jim is survived by his wife, Mary E (nee Pereau); his children, James Richard Jr. (Wendi), Donna L. Keller (Phil), MaryEllen Imperato (Thomas J.), and John E. Brown (Lynn M.); his 10 grandchildren, Stacey, Amanda, Kelly, Tabitha, Ian, Nichole, Jeramy, Devyn, Matthew, and Michael; his five great grandchildren, Angelina, Dominic, Millie, Addison, and Bennett; his sister, Margaret Brown Weidersphan; his nieces, Tina, Susan and Patty; his nephew, Brian; his sister-in-law, Donna L Starts (nee Pereau) (Dennis); and his nephews, Derek and Jason A visitation will be held on Friday, January 15th from 5-9 PM and again on Saturday, January 16th from 9-11 AM at Weekstown Community Church. The service will start at 11:00 AM and is limited to 75 close family and friends. Interment will immediately follow at Germania Cemetery. Arrangements have been entrusted to Wimberg Funeral Home in Galloway. For condolences, please visit wimbergfuneralhome.com. The service will live on Saturday, January 16th. You can login by 10:45 am at this link; https://webcast.funeralvue.com/events/viewer/45112

James Richard Brown Sr, 79, of Mullica Twp., passed away on January 9, 2021 at home in the arms of his loving wife Mary, surrounded by his loving family. He was born in Camden, NJ. When Jim was young, he spent a lot of time with his Uncle Jim... View Obituary & Service Information

The family of James Richard Brown Sr. created this Life Tributes page to make it easy to share your memories.

Send flowers to the Brown family.