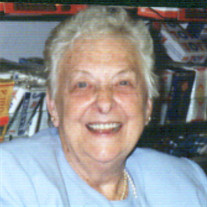 Gurine Isaksen, 101, (nee Hoines) passed to her eternal home in heaven on Saturday, April 22, 2017. Gurine was born on April 11, 1916 in Olen, Norway to Jakob and Ragna Hoines. She grew up in Skudenes, Norway where she married her husband, Hans, in 1936. Although Hans worked in the United States and served in the American Army, Gurine and their son, Alf, were forced to remain in Nazi-occupied Norway during World War II. In 1946, the family was reunited and made their home in Atlantic City before moving to Absecon in 1958. Gurine was an active member of Reformation Lutheran Church, where she served on the Altar Guild, taught Sunday School and helped with Vacation Bible School for many years. Gurine was also a member and treasurer of the Lutheran Church Women and especially enjoyed her time with her many friends at “Pins and Needles”. After moving to Galloway and later to Port Republic, Gurine remained active, knitting countless socks, scarves, baby blankets and crocheted doilies. She made friends wherever she went and enjoyed their company at the Port Republic “Young at Heart” dinners and helping with the Atlantic City Rescue Mission Auxiliary. Her family is grateful for the many compassionate caregivers at Absecon Manor who lovingly attended to her needs during her final months. Gurine was predeceased by her husband of 54 years, Hans Isaksen; her parents, Jakob and Ragna Hoines; her brother, Rolf Hoines; and her grandson, Jonathan DeMario. She is survived and will be sadly missed by her children: Alf Isaksen (Tove), Janet Isaksen and Helen DeMario (John); her grandchildren Gary Isaksen (Tamara), Tron Isaksen (Retha), Kirsten Gonyea Sullivan, Kristian Gonyea, Helena DeMario Keeter (Matthew), Andrew DeMario and Josef DeMario; and her great-grandchildren Alise Isaksen, Erik Isaksen, Kaitlyn Gurine Sullivan, Anika Matthews and Vienna Keeter. Funeral services will be held at 1:00Pm on Tuesday, April 25, with visitation beginning at 11:00 A.M. at Reformation Lutheran Church, N. Shore Rd and E. Biscayne Ave., Absecon, N.J. Burial will follow at the Port Republic Cemetery. Arrangements have been entrusted to Wimberg Funeral Home, 211 E. Great Creek Rd, Galloway, 609-641-0001. For directions or condolences, please visit wimbergfuneralhome.com In lieu of flowers, donations may be made in Gurine’s memory to Reformation Lutheran Church or to the Jonathan B. DeMario Scholarship Foundation.

Gurine Isaksen, 101, (nee Hoines) passed to her eternal home in heaven on Saturday, April 22, 2017. Gurine was born on April 11, 1916 in Olen, Norway to Jakob and Ragna Hoines. She grew up in Skudenes, Norway where she married her husband,... View Obituary & Service Information

The family of Gurine H Isaksen created this Life Tributes page to make it easy to share your memories.

Send flowers to the Isaksen family.