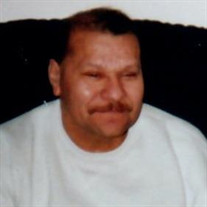 Gilberto Arroyo Sr., 65, of Egg Harbor City, passed away peacefully in his home surrounded by loved ones on February 6, 2018. Gilberto was born September 5, 1952 in Sabana Grande, Puerto Rico, and moved to this area when he was 14 years old. At age 19, he met his wife, Isabel Ortiz and together they started a family. Gilberto was a long time resident of Egg Harbor City and before he began his battle with diabetes had worked for Wheaton’s Plastic in Mays Landing for 10 years. Prior to that, Gilberto was employed by local boat building companies. Gilberto was predeceased by his mother, Nilda Vasquez; father, Jose Arroyo; son, Charlie Arroyo; sister, Virginia Arroyo Santiago; and brother, Jose Angel Arroyo “Cheo.” Gilberto is survived by his wife, Isabel Arroyo; son, Gilberto Arroyo Jr. (Shauna); daughter, Betsy Arroyo (David Ciriaco Sr.); granddaughters, Amanda, Eryka, Aryel and Imyah; grandson, David Ciriaco Jr.; great grandson, Xavien; sisters, Rosa Arroyo (Pedro), Sol Vega (Edwin); and sister-in-law, Lucy. He is also survived by a host of aunts, uncles, nieces, nephews, cousins and friends. Gilberto was a loving man who cared deeply for his family and enjoyed every moment he spent with them. He always looked forward to family gatherings and being surrounded by his friends and loved ones. Gilberto shared his passion for cars and motorcycles with his brother and sons. He will be sadly missed and forever in our hearts. Visitation will be held at Wimberg Funeral Home, 400 Liverpool Ave, Egg Harbor City 609-965-0357 on Sunday, February 11th from 3pm to 6pm and Monday February 12th from 10am to 11am with the service beginning at 11:00am. Interment will immediately follow at Egg Harbor City Cemetery.

Gilberto Arroyo Sr., 65, of Egg Harbor City, passed away peacefully in his home surrounded by loved ones on February 6, 2018. Gilberto was born September 5, 1952 in Sabana Grande, Puerto Rico, and moved to this area when he was 14 years old.... View Obituary & Service Information

The family of Gilberto Arroyo Sr. created this Life Tributes page to make it easy to share your memories.

Send flowers to the Arroyo family.